‘Early warning must reach the last metre. The last mile is not enough’ 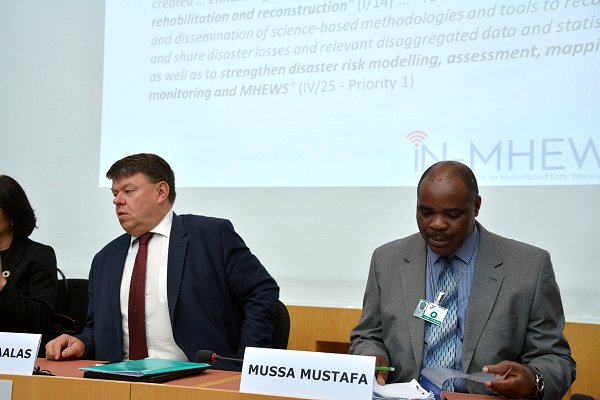 The Second Multi-Hazard Early Warning Conference (MHEWC) organized by the World Meteorological Organization ended in Geneva yesterday with what the WMO called a “take-home message” that science, technology and big data can save lives, “but communication is key”.

In a tweet the WMO say warnings must be “useful, usable and used”, addressing real problems and generating viable responses.

A side event Monday led by the IFRC and the UN Food and Agriculture Organization that also included the Climate Centre focused on enhancing the link between early warning and early action through ‘impact-based forecasts’ (IBF) that paint a picture of what extreme weather will do on the ground as well as simply what it will be.

It explored “scientific research on IBF and [discussed] next steps to move towards institutionalizing IBF to support the humanitarian sector and others to reach the most at-risk populations,” according to a concept note.

‘Early warning systems are
a very powerful way to adapt’

Climate Centre Director Maarten van Aalst, who moderated the session, tweeted that it was especially welcome that MHEWC was “looking not just at what the weather will be, nor even at what it will do, but also at what we do with that information”.

Talking about the world-renowned Cyclone Preparedness Programme in Bangladesh, the American Red Cross Country Representative in the country, Achala Navaratne, told another MHEWC session: “Early warning is important but it only works if results to action by communities. It must reach the last metre. The last mile is not enough.”

The multi-hazard conference, which also covered seismic risks, is a preparatory event for the 2019 Global Platform for Disaster Risk Reduction convened by UNDRR that gets fully underway today.

Both are being held “as two unprecedented back-to-back tropical cyclones in Mozambique and a major cyclonic storm in India underline, yet again, the need for coordinated disaster risk reduction strategies, including strong early warning systems,” the WMO said last week.

Secretary General Petteri Taalas told delegates: “Climate change mitigation is essential for the welfare of coming generations but it is also important to pay attention to climate change adaptation. Early warning systems are a very powerful way to adapt.”

UNDRR chief Mami Mizutori said is her own opening address: “We know that thanks to improvements in early warnings there are many people alive today because of the great progress made in the science and technology behind meteorological services, satellite earth observations, seismic alerts, and a spreading culture of disaster risk management…”

The world had seen a “very vivid example of that” recently in India and Bangladesh with Cyclone Fani, but Cyclones Idai and Kenneth that killed hundreds of people and caused massive devastation in Southern Africa, she said, “tell another story”.

A WMO press release quoted Mussa Mustafa, Deputy Director-General of Mozambique’s national meteorological and hydrological service (at right in photo), as telling the MHEWC that people in low-lying areas of his nation were caught without flood warnings.

There had been no contingency plan to deal with an event of such magnitude, the response had been too slow and there was a “total breakdown in communications and basic services”, it added.

“Too much attention was focused on the fury of the wind, and not enough on the flooding potential of the torrential rainfall.”

Cyclone Kenneth had later hit a northern area unused to intense tropical cyclones, so a major challenge was convincing the community to evacuate, the Mozambican official is quoted as saying.

The IFRC added yesterday that the current global platform was taking place “under the shadow of Cyclone Idai – a disaster that underscored how little investment the international community makes in protecting vulnerable people from rising disaster risks.”

This discrepancy was less when longer-term risk reduction efforts are taken into account, but it remained. For example, in recent years the IFRC network had invested some 7m Swiss francs in disaster risk reduction in Mozambique, including German-supported forecast-based financing.

But IFRC Secretary General Elhadj As Sy said Idai “was a reminder that the way we respond to disasters is out of balance. Lack of investment to reduce and prevent disaster impacts results in more and more money needed to save lives and repair damages after the fact.

“Such a model doesn’t work for people who are at risk of storms and flooding. It’s also a model that doesn’t make financial sense, especially as we anticipate increased weather-related disasters as a result of climate change.”

The Deputy Director-General of Mozambique’s national meteorological and hydrological service, Mussa Mustafa, told a conference in Geneva that people in low-lying or northern areas of his nation were taken by surprise by this year’s unprecedented back-to-back storms. On his right is WMO Secretary General Petteri Taalas who said early warning systems are a very powerful way to adapt. (Photo: WMO)