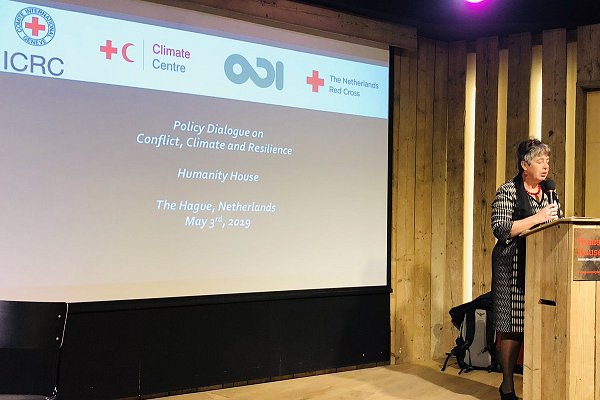 The Dutch government last week called for “more and better [development] programming that is both conflict- and climate-sensitive”.

The Director General for International Cooperation at the Ministry of Foreign Affairs, Reina Buijs (photo), said Friday that in conflict-affected and food-insecure rural regions, like the Horn of Africa, for example, the Netherlands was now supporting the resilience of food systems.

She was speaking in The Hague at the latest policy dialogue on conflict, climate and resilience – one of a global series of round tables that began in Nairobi in January.

“Through technical support,” she explained, “like improved post-harvest handling and storage, feed and seed systems, and assistance on issues like land rights, we help populations to be more resilient to shocks so conflict-induced food insecurity can be prevented.”

The round tables on policy are being jointly organized by the UK-based Overseas Development Institute, the ICRC and the Climate Centre; the Netherlands Red Cross joined the organizational team for the event in The Hague. The next round table, centred on Middle East issues, is planned for Amman next month.

‘People can’t adapt if they can’t cope.
Humanitarian action must adapt itself
so we support communities onto adaptive pathways’

Ms Buijs said in her opening address: “The world is experiencing a relentless increase in extreme weather events, accelerated desertification, loss of biodiversity and a steady depletion of resources upon which millions of livelihoods depend.”

The “interlinkage between stressed natural habitats and the risk of conflict” was clear, and this was why the Dutch “cooperation agenda focuses on prevention, resilience and global prospects.

“It’s an agenda guided by the Sustainable Development Goals, and the pledge to leave no one behind and attend to those furthest behind first.”

The Dutch official said she was also encouraged, however, by three factors: the growing community of practice on climate, conflict and security, including, since 2015, the Planetary Security Initiative; the fact that climate-related security was now high on international agendas, with the UN climate summit this September incorporating, as she put it, “a strong push for more early-action”; and technological progress that “allows us to better understand and predict climate-related risks”.

She concluded that “we’ve never been so skilled at using [data] in predictive models. In other words, we can now look further into the future than ever before. And we’ve never had better technology to help us prepare, to help us act.”

The round table in The Hague was jointly opened by ICRC Director General Yves Daccord, who said that in its daily work the International Committee was witnessing the impact of climate change, shocks and risks on populations.

“Several conflict-affected countries are among the most vulnerable to climate change – because of their location, but also because of their limited capacity to anticipate and adapt to changes,” he told the meeting.

“People can’t adapt if they can’t cope. This is where humanitarian action must adapt itself so that we support communities onto adaptive pathways.

“Despite having witnessed and responded to some of the compounding vulnerabilities caused by combined climate shocks and conflict, that response has not necessarily been designed through a climate lens.

“To ensure sustainable humanitarian impact, we need to develop our understanding of how climate change affects the people we work with and adapt our programmes to support their resilience – this is something we have committed to in our institutional strategy.”

The Hague round table was held at the city’s Humanity House venue. France’s Climate Change Ambassador Brigitte Collet also took part, tweeting that the meeting would seek ways to “better respond to the aggravating impact of climate change on the most vulnerable”.

Among at least 25 other agencies represented were the EU External Action Service, the IFRC, the Global Resilience Partnership, UNDRR, the World Food Programme, and the Global Commission on Adaptation.

Reina Buijs, Director General for International Cooperation at the Netherlands Ministry of Foreign Affairs, giving her opening address at the latest inter-agency round table dialogue on conflict, climate and resilience. (Photo: Clare Dalton/ICRC)