Early warning for waves helping to build resilience in Tuvalu 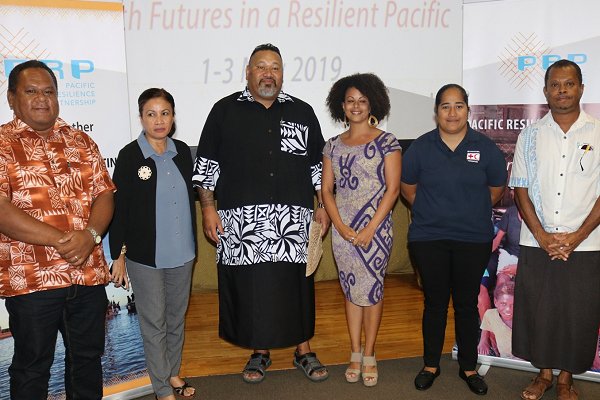 (This story appeared first last week on the website of the Secretariat of the Pacific Regional Environment Programme.)

In 2015, Tropical Cyclone Pam was located near Vanuatu, over 1,000km away from Tuvalu, yet it caught Tuvalu unaware as it wreaked havoc in all of its nine islands.  This has led to the development of forecasting model software to help ensure this never happens again.

Wave-drive inundation is very complex.  Normal wave models and forecasts do not pick up “infra-gravity waves” as they are generated locally as waves break over the reef.

Adding to this was the challenge that up until 2016, there were no forecast modelling tools to help small islands have an understanding of the possible impact of waves.

Global models available were of a 50km resolution, yet due to the small land mass of Tuvalu, it needed a regional model that could provide a 1km resolution.

“We knew the cyclone was coming past us but we had no way to know of what the impact of this would be. We know about the winds, but how this will affect us in terms of the waves was something new,” said Tauala Katea, Director of the Tuvalu Meteorological Service as he presented his Pacific story of resilience during the ignite session of the inaugural Pacific Resilience Meeting in Suva, Fiji.

“We experienced something we would never forget, we were taken by surprise.”

Since then the Offshore Wave Forecasting Modelling software was developed by the Pacific Community (SPC) with support from Germany specifically for Tuvalu and has allowed them to provide and predict wave heights for all nine islands during a major wave event, with a lead time of three to five days.

It produces a direct inundation map for a given coastline which merges sea-level anomaly, and tide and wave data, as well as reef processes. This means that weather bulletins now allow for this information to be shared.

“While forecasts will not prevent inundation events, they can help local authorities and communities prepare and if needed, evacuate certain areas to prevent loss of property and life,” said Mr Katea.

“We are now able to do something that we have never been able to do before, use the new wave-forecast tool specific developed for Tuvalu.”

Tuvalu now has many monitoring and forecasting tools, more ocean data, and more methods of making sure forecasts, warnings, and ocean conditions reach the communities that need them.

Many of these have not been done in isolation but as part of an integrated, capacity-building approach. Tuvalu Met Service, SPC, and the World Meteorological Organization are now working on a Climate Early Risk Warning System which will continue to build on and further enhance this system in the months and years ahead.

“We will continue to build upon all tools and further refine and improve our capacity to predict and monitor ocean and coastal conditions,” Mr Katea added. “Our Tuvalu Met Service is a great example of how targeted investment in technology and capacity building can build resilient communities and countries.”

Work undertaken to enhance this capacity in Tuvalu and across the Pacific region is guided by the Pacific Islands Meteorological Strategy 2017–2021 which is coordinated by the Pacific Met Desk Partnership at the Secretariat of the Pacific Regional Environment Programme (SPREP).

Every two years the Pacific Met Directors and partners meet under the Pacific Meteorological Council which will be hosted by the Government of Samoa in August.

Mr Katea presented during the ignite session of the inaugural Pacific Resilience Meeting hosted in Suva, Fiji at the University of the South Pacific from 1 to 3 May.