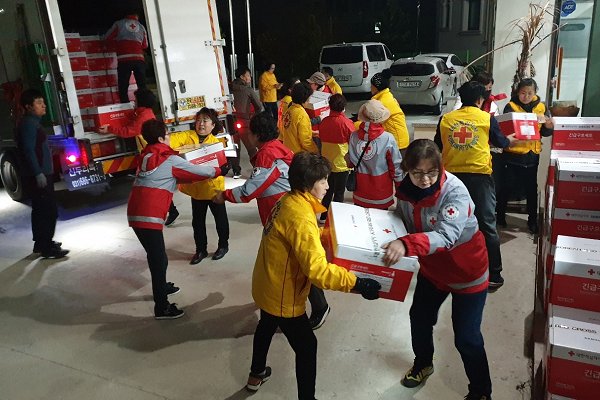 “These are projects that have the maximum impact on people’s lives because they enable communities to mitigate and adapt to climate change by turning early warning information into something concrete and actionable,” said GCF Senior Climate Information and Early Warning Systems Specialist, Joseph Intsiful.

He was speaking in an interview with the Climate Centre after last month’s Korea Global Adaptation Week – attended by more than 400 people in the GCF’s home base of Songdo, 30km south-west of Seoul.

“By providing communities with climate information they can understand and act on,” he added, “as well as the right incentives such as cash or climate-resilient crops, they will be empowered to prepare and act before a disaster strikes.”

GCF Executive Director Yannick Glemarec said in an opening address at the Songdo conference that “adaptation projects need to be underpinned by substantive climate science, notably to identify anticipated changes in climate, their impact and the vulnerabilities of affected populations.”

With nearly two thirds of all GCF projects focused at least partly on adaptation, Mr Glemarec said, engagement by the private sector was critical, and the fund would support “viable business models that generate reflows to private investors through greater use of non-grant instruments”.

Recent Red Cross Red Crescent experience with forecast-based financing (FbF) was detailed by the IFRC and Climate Centre in panel discussions in Songdo organized by the GCF within TEM-A – the Technical Examination Process on Adaptation.

“Combined with impact-based forecasting, it could be transformational; it improves disaster preparedness and enables governments to manage budgets better.

The Korea Global Adaptation Week also included the sixth Climate Resilience Roadshow, led by Partners for Resilience, BRACED, Action on Climate Today, and the Climate Centre – part of an expo on national adaptation plans under the UN Framework Convention on Climate Change.

A UNFCCC press release from Songdo last month, before Cyclone Kenneth struck, said the meeting was being held “against the background of…Cyclone Idai, which has impacted millions in Africa, and one of the largest wildfires in the history of the Republic of Korea in Gangwon province (photo).”

The NAP Expo also “for the first time launched practical engagement of youth in climate change adaptation by launching the Global Youth Adaptation Dialogue,” the UNFCCC added, “to open a conversation by youth that considers the future of adaptation through NAPs.”

The Republic of Korea Red Cross Gangwon branch was able to deploy a mobile kitchen, relief items and at least 120 staff and volunteers as last month’s huge wildfire took hold. Now forecast-based financing projects like the ones supported by the German government through the Red Cross are helping at least 20 National Societies worldwide take anticipatory humanitarian action; and the Global Climate Fund believes FbF and impact-based forecasting combined could be “transformational”. (Photo: KNRC)