IFRC at centenary climate and health conference in Cannes: a call for ‘inspiration, resolve, leadership’ 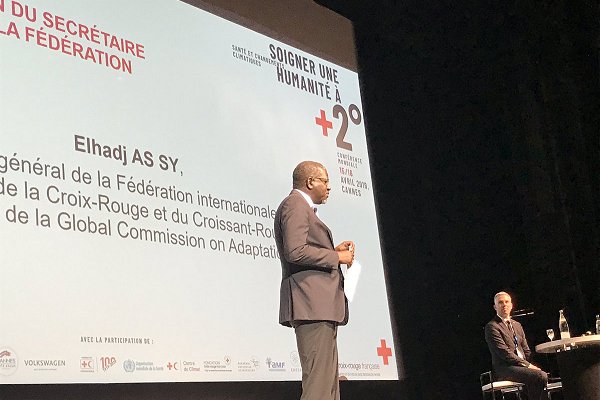 The major global conference on climate and health organized by the French Red Cross in the Mediterranean city of Cannes ended yesterday. Described in an opening address as “the first humanitarian COP” by FRC President Jean-Jacques Eledjam, the two-day World Conference on Health and Climate Change aimed to link global ambitions on climate with the experience of the Red Cross Red Crescent network and its partners.

Some 400 officials, academics, humanitarians and other concerned people from the all over the world took part in 15 debates, including Laurent Fabius, President of France’s Constitutional Council who was also president of the COP21 climate talks that secured the 2015 Paris Agreement.

The Cannes conference was also timed to commemorate the centenary of the IFRC, created as the League of Red Cross Societies by the American, British, French, Italian and Japanese Red Cross in 1919, shortly after they had also met in Cannes’s historic Théâtre Croisette, its venue this week, to coordinate their work.

On Tuesday IFRC Secretary General Elhadj As Sy said he hoped the conference would “start planting the seeds for the next visionary 100 years”.

In a keynote address that he began by commiserating with the French people over the fire at Notre Dame cathedral, Mr Sy said it was no longer possible to deny the impact of climate change on the “triptych of people’s lives, livestock and livelihoods”.

It was also going to be “the source of the conflicts of tomorrow [which will] no longer be around mineral resources but a commodity as simple and easy as water”.

“We are more equipped than ever before, but I’m not sure that we have the same sort of inspiration, the same resolve, or the same leadership.” Now, he argued, it was time to “communicate a sense or urgency that people need these things”.

For the Red Cross Red Crescent, he added, “where it matters most, we have to be there all the time, and, all the time, beside people in need – before the shocks, before the outbreaks, and also during, and most importantly after”.

Mr Sy argued that “we cannot always blame climate change” for the “doom and gloom” abroad in the world. “Maybe we should start where it matters most, with each of our individual behaviours,” looking at consumption patterns, how we care for each other, or not, and how we plan our communities and cities.

In other IFRC engagement in Cannes, International Federation President Francesco Rocca, in his own opening address Monday, said global action on climate is growing “and this is a very good sign. But the fact is that interest is not keeping up with the rising risk.

“We in the Red Cross Red Crescent have the responsibility to raise the profile of the issue of climate change, take action to address the rising risks, and prepare for the important [global] discussions” later this year.

IFRC Director of Health and Care Emanuele Capobianco outlined its four-point plan for plugging gaps to achieve universal health care: expanding human resources and the volunteer base, going the “last mile” to reach the most vulnerable communities, fighting epidemics (some of them now climate-related), and instituting financial protections.

He earlier tweeted that he had travelled to Cannes from Beira, Mozambique with “images and stories that are a stark reminder of why this conference is important.”

Detailing some anticipatory financing mechanisms already in use in the humanitarian sector, such as German-supported forecast-based financing, Under Secretary General for Partnerships, Jemilah  Mahmood said it was vital to leverage finance for “the ‘perfect storm’ of climate change and poverty and their health consequences”. Moving from reactive to anticipatory finance, she argued, was key.

Monday’s opening session heard an impassioned plea for greater ambition on climate from Alex Pinano, President of the Marshall Islands Red Cross, the global Movement’s newest National Society: “We don’t want two degrees. We want 1.5 or we will become the nomads of the Pacific. Our home, our paradise, will disappear.

Climate Centre Director Maarten van Aalst facilitated a specialist workshop on adapting to heatwaves in urban areas where participants expressed their commitment to raise ambition to address what was described as “among the biggest killers” of natural disasters.

Karine Laaidi of Public Health France said heatwave plans including national early warning had reduced mortality dramatically since the 2003 disaster, although it was still in the hundreds and even thousands annually.

She said that key interventions included the need to further raise awareness of risk, including among vulnerable elderly, and ensure people look after each other – both areas where organizations like the Red Cross Red Crescent can play a key role.

Discussions also highlighted the gap in awareness and even basic data in many developing countries, though mortality and economic impacts are equally significant.

On Monday, Nick Watts of the Lancet Countdown research collaboration told the conference that 157 million more “heatwave exposure events” happened to people globally in 2017 – an increase of 18m over the previous year, with 153 billion hours of labour lost – an increase of 62bn.

IFRC Secretary General Elhadj As Sy addresses the World Conference on Health and Climate Change in Cannes, which also marks the centenary of the International Federation’s birth in the same city. But he told his audience that “the scale and magnitude of the issues of yesterday are in no way comparable” to today. (Photo: social media)