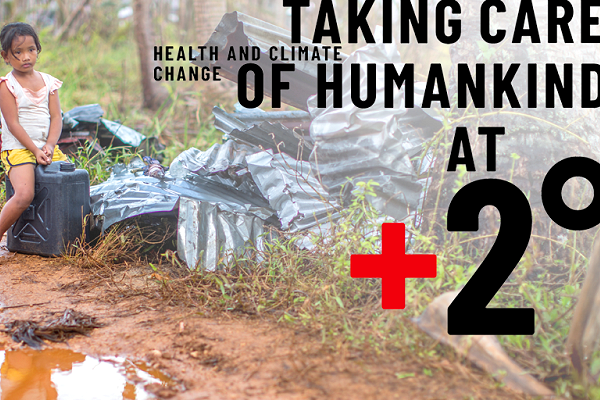 (Editors: an IFRC media advisory to mark this occasion was issued yesterday in Cannes and Geneva.)

Delegates were gathering in the French Mediterranean city of Cannes this weekend for a conference organized by the French Red Cross that it’s called “the first ever ‘humanitarian COP’, linking global ambitions to the experience of the Red Cross and Red Crescent network and its partners.

The World Conference on Health and Climate Change on Monday and Tuesday will centre on “the latest scientific research, and innovative solutions designed to meet the greatest public health challenge of the 21st century,” a FRC press release says.

It also marks the centenary of the foundation of the IFRC, founded on 5 May 1919 by the American, British, French, Italian and Japanese Red Cross shortly after they had met in Cannes’s historic Théâtre Croisette – also next’s week venue – to decide how best to coordinate their work.

“Even if the COP21 Paris Agreement’s ambitions for climate change are met and the planet warms by no more than 2°C, there will still be consequences – some of them severe – for human health,” the FRC adds.

“Every country in the world, from north to south, is affected by this issue and must adapt, not least to protect the most vulnerable citizens.”

‘The greatest public health challenge
of the 21st century’

Organizers say that in the course of the two-day event a wide range of climate-related issues will be covered, including “everything from urban heatwaves to epidemics, disasters, mass migration, malnutrition, conflict and mental health”.

The ultimate aim of the discussions will be to “formulate tangible, innovative adaptation solutions and raise awareness among citizens and public and private sector decision-makers of the need to prevent, prepare and take collective action.”

Four-hundred experts and specialists – officials, academics, humanitarians and other concerned people from the all over the world – will take part in some or all of 15 debates, including Laurent Fabius, President of France’s Constitutional Council who was also president of the COP21 climate talks in 2015 that secured the Paris Agreement.

Describing adaptation as “absolutely crucial”, Mr Fabius said in a specially recorded interview: “We can’t wait for climate change to come under our control. We have to act now through a whole series of systems – financial systems in particular – so that countries can better cope with climate change.

“I don’t mention finance lightly here: it’s estimated that only 0.5 per cent of funding given over to health issues by multilateral organizations relates to adaptation, and that is nowhere near enough.”

The French Red Cross has also curated a selection of nearly 40 recent news stories on climate and health – from the commercial media, humanitarian agencies including the Red Cross Red Crescent, and other expert sources, including FRC regional platforms in the Americas and the Indian Ocean.

In the former the National Society details how the Réseau d’expertise et mobilisation participative project, launched just over a year ago, aims to reduce the risk of mosquito-borne dengue fever, chikungunya, yellow fever, zika and malaria in French Guiana, Suriname, Guyana and Brazil.

Since 2011, meanwhile, the French Red Cross Regional Intervention Platform in the Indian Ocean has been running a disaster-risk awareness campaign in Reunion – a programme that was expanded in 2018 after a dengue fever epidemic to include public health.

In another specially recorded interview, Climate Centre Director Maarten van Aalst said “one of the biggest rising risks with climate change is heatwaves in urban areas.

“They’re a real killer – thousands if not tens of thousands of people die every year – yet they’re also unrecognized, especially in many of the mega-cities that are growing so rapidly in developing countries.

“But the solutions are often quite simple: to have early-warning systems, for example, then providing really simple advice so that people stay out of the heat, and that elderly people especially drink enough water.”

National Societies, he said, could play a “really powerful role” in such preventative work.

There’s now widespread agreement among scientists that lethal heatwaves are starting earlier and ending later with climate change, and last December the first-ever international expert forum was held in Hong Kong to find ways to reduce the risk; that meeting was co-hosted by several multilateral agencies along with the American and German Red Cross, the Hong Kong branch of the Red Cross Society of China, and the Climate Centre.

In its first major analysis of the health impacts of climate change, the Climate Centre in 2013 itself published Health risk management in a changing climate, centring on a Red Cross Red Crescent project that explored the integration of climate with health programming in Indonesia, Kenya, Tanzania and Vietnam.

The World Conference will also feed into September’s UN climate summit, and the IFRC Director of Health and Care Emanuele Capobianco last week participated in a high-level round table in New York, convened in preparation.

Those discussions highlighted the rising risks from heatwaves as well as droughts and floods, often followed by cholera, as recently in Mozambique, and how to reduce them, including, for example, through innovative financing mechanisms.

The World Conference on Health and Climate Change focuses on a “two-degree world”. In the IPCC report known as SR1.5 scientists spelt out the dangers of a 2.0°C rise in the global temperature by the end of the century, as well as the benefits of limiting the rise to 1.5°C. (Graphic: French Red Cross)