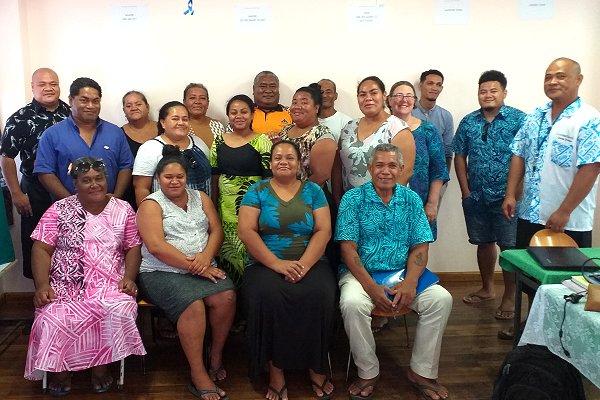 The challenges of reaching the ‘last mile’ and building the partnerships needed to address them were front and centre in a dialogue on early warning early action convened by the Tuvalu Red Cross Society (TRCS) on Funafuti, capital of the Pacific island nation, late last month.

It brought representatives from community disaster committees from Tuvalu’s outer islands together with national climate and disaster-management stakeholders, including the Tuvalu Meteorological Service (TMS) (photo).

The dialogue included a wide variety of stakeholders, providing an opportunity for engagement with individual community members, forming links for future work within their operational areas.

The need for women and the most vulnerable people to access warning information was discussed. “How can I get weather warnings if I have no access to internet, phone or radio?”, said Siuila Enosa of the Te Kavatoetoe disaster committee.

“It’s important that everyone gets weather warnings,” said Salesa Salesa of the Gender Affairs Department of the Office of the Prime Minister.

“We should also look at other ways besides radio warnings and online information that will benefit the blind or deaf and people who are not mobile.”

One solution identified was strengthening the community disaster committees: “If the committee is active then it will be able to help everyone,” Siuila Enosa added.

Practical suggestions included forging strong connections with the TMS and enabling people to access its email weather-warnings and other online information.

Existing innovations included the use of the fire service to relay warnings on larger islands and the system known as ‘Valo’ on outer islands in which warnings are relayed through loudhailers carried by people moving around on scooters.

The Funafuti dialogue also gave the TMS an opportunity to share details of recent initiatives to improve the accessibility of information on drought through its public ENSO (El Niño-Southern Oscillation) signboard on Funafuti and the Early Action Rainfall Watch bulletin.

Other possible aids identified at the dialogue were more ENSO signboards for outer islands, translating the terminology used in climate bulletins into simple language, and linking warnings to recommended actions.

Traditional knowledge is “still very relevant in Tuvalu and should be shared with everyone, alongside awareness workshops for weather and climate change,” said Luuni Tinilau, Chairman of the Lofeagai disaster committee.

Salesa Salesa said the dialogue had been “a valuable opportunity for the voice of women at the last mile to be heard” by national stakeholders.

Tusi Finikaso, TRCS Disaster Management Officer, added that it had “provided the opportunity to learn about the needs of the disaster committees and create a platform for further engagement with them” by the National Society and other agencies.

Tuvalu’s dialogue on early warning early action was conducted by the Tuvalu Red Cross, the IFRC and the Climate Centre with support from the Australian government and Red Cross; it’s part of ongoing engagement between the Red Cross in the Pacific and local meteorological services for the benefit of communities. (Photo: Tusi Finikaso/TRCS)