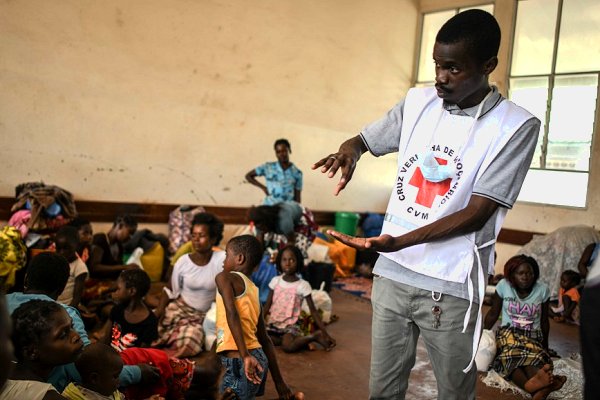 (This story is a press release issued by the IFRC in Beira, Nairobi and Geneva on Monday. It has been edited here for time references.)

The Red Cross and Red Crescent network is speeding up efforts to prevent disease outbreaks in the aftermath of Cyclone Idai with the arrival Monday of an Emergency Response Unit that will provide sanitation for 20,000 people every day. An emergency field hospital will follow.

“After a disaster of this magnitude, the speed, quality, and scale of our response is critical to to stop the risk of waterborne disease outbreaks like cholera,” said IFRC Secretary General Elhadj As Sy at a media briefing at the United Nations in Geneva Monday.

“As flood waters recede, hundreds of thousands of people still lack water, shelter and health care. We now see even more clearly the real consequences of this disaster.”

Many National Red Cross and Red Crescent Societies are also supporting the response through the deployment of Emergency Response Units (ERUs) made up of trained technical specialists and pre-packed sets of standardized equipment deployed at short notice. They are vital disaster response tools, providing immediate support.

The hospital can provide medical services, emergency surgery, maternal and newborn care as well as inpatient and outpatient services for at least 150,000 people.

A cargo flight from Geneva carried a logistics ERU that will ensure that goods are received and channeled through customs, and that transportation is available for Red Cross volunteers.

The logistics ERU plays a key role in ensuring that resources provided by donors are tracked and managed. A further ERU – which will provide clean water for 15,000 people a day – arrived earlier this week.

The IFRC is tripling its emergency appeal from an initial 10 million to 31 million Swiss francs, to support a huge escalation in the Red Cross and Red Crescent response and prevention efforts.

The funds will enable IFRC to support the Mozambique Red Cross to provide 200,000 people with emergency assistance, water, sanitation and hygiene, shelter, health, livelihoods and protection services over the next 24 months.

“We are seeing tremendous collaboration and partnership from National Red Cross and Red Crescent Societies from all over the world, and from our international and United Nations partners,” said Mr Sy.

“But this disaster is not over, and we need to brace ourselves for the months ahead. It is vital that the response also empowers local leaders and local humanitarian actors, as Mozambique responds to this crisis.”

Cyclone Idai has affected more than 1.85 million people in Mozambique, according to the United Nations.

An estimated 483,000 people have been displaced by the floods, which destroyed and submerged an area of more than 3,000 square kilometres.

Mozambique Red Cross volunteers have been providing first aid and health counselling to hundreds of displaced families after Cyclone Idai. The international Red Cross and Red Crescent response to the disaster has been significantly scaled up this week with the arrival of more ERUs and a tripling of the emergency appeal. (Photo: Corrie Butler/IFRC)