Cyclone Idai in Mozambique: ‘The scale of this crisis is staggering’ 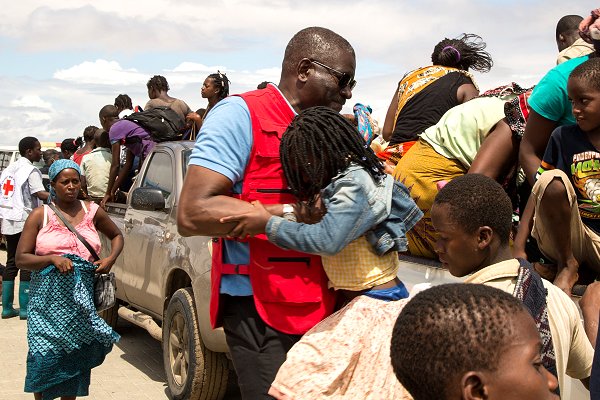 (This story is a press release issued by the IFRC yesterday in Beira, Nairobi and Geneva. New video of the IFRC Secretary General in Mozambique is available at the IFRC Newsroom.)

IFRC Secretary General Elhadj As Sy, speaking at the end of a visit to Beira, Mozambique, and surrounding areas, said: “The scale and scope of suffering and damage is breath taking. Hundreds of thousands of people have been impacted in some way.

“We must respond fast and at scale, and prepare to accompany the affected populations on a longer term.”

Mr Sy visited areas outside of Beira that were flooded by the cyclone. He also joined Mozambique Red Cross volunteers at the port in Beira as they received people who had been evacuated from flooded areas by boat (photo).

“I was able to fly over some of the flooded areas. The scale of this crisis is staggering. But we can’t forget that it is an intimate and human crisis.

“Tragically, we know that the full picture of this disaster is probably even worse than it seems now. The death toll will probably rise further as more and more areas are reached and as more and more bodies are recovered,” said Mr Sy.

There is growing concern among aid groups on the ground of potential disease outbreaks.

Already, some cholera cases have been reported in Beira along with an increasing number of malaria infections among people trapped by the flooding.

This appeal will be substantially increased in the coming days as IFRC expands its operation to reach more people.

Already, 1,500 emergency shelter kits that have already been distributed by Red Cross volunteers, providing families with protection from the elements and some degree of privacy and dignity.

Shelter supplies for about 3,000 families will arrive by boat next week from the French Red Cross warehouse on La Réunion.

A further dispatch of basic relief supplies including tarpaulins, buckets and blankets – enough for 37,500 people – will arrive mid-next week.

In addition, two IFRC Emergency Response Units (ERU) – one that can provide basic sanitation facilities for 20,000 people, and one that can produce clean water for 15,000 people per day – will arrive in Beira early next week. A third logistics ERU is also en route.

The IFRC Secretary General helps a child off a pick-up truck as evacuees from Buzi arrive at Beira port on Thursday. Mr Sy described the scale of the devastation wrought by Cyclone Idai as staggering. “Tens of thousands of families have lost everything. Children have lost parents. Communities have lost schools and clinics,” he said at the end of his visit. (Photo: Denis Onyodi: IFRC/DRK/Climate Centre)