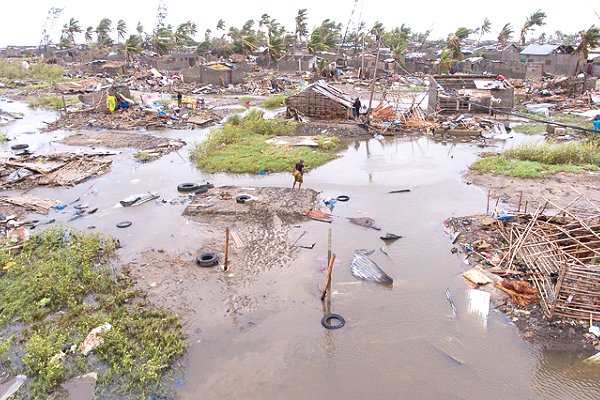 (This story is a press release issued by the IFRC in Geneva and Nairobi earlier today.)

The scale of damage caused by cyclone Idai that hit the Mozambican city of Beira is massive and horrifying. This is the initial assessment of a team of IFRC aid workers that reached the devastated city yesterday.

Jamie LeSueur, who is leading the IFRC assessment team into Beira, said the following after taking part in a Red Cross aerial assessment: “The situation is terrible. The scale of devastation is enormous. It seems that 90 per cent of the area is completely destroyed.”

The IFRC team that arrived yesterday was among the first to arrive in Beira since Idai made landfall on 14/15 March.

With Beira’s airport closed, the team drove from the capital Maputo before taking a helicopter for the last part of the journey. Roads into Beira have been cut off by flooding.

While the physical impact of Idai is beginning to emerge, the human impact is unclear.

“Almost everything is destroyed. Communication lines have been completely cut and roads have been destroyed. Some affected communities are not accessible,” said LeSueur.

“Beira has been severely battered. But we are also hearing that the situation outside the city could be even worse. Yesterday, a large dam burst and cut off the last road to the city.”

Following its landfall in Mozambique Cyclone Idai continued west to Zimbabwe as a Tropical Storm, wreaking havoc in several districts in the eastern part of the country, with Chimanimani and Chipinge districts in Manicaland Province being the hardest-hit.

At least 31 deaths have been reported and over 100 people are missing in Zimbabwe, the latest country in Southern Africa to be hit by heavy rains and violent winds, after Malawi and Mozambique.

The death toll in the three countries is currently estimated at 150. But this number is likely to change as the full extent of the damage becomes clear. More heavy rain is also anticipated and this may lead to further devastation.

The IFRC has already released about 340,000 Swiss francs from its Disaster Relief Emergency Fund which will go towards an initial response effort for about 7,500 people.

However, given the scale of the disaster, more resources may be needed to support Mozambique Red Cross efforts on the ground. Already, the team in Beira has identified shelter, health, and water, sanitation and hygiene as priorities.

The IFRC first-response team made the last leg of the journey from Maputo to Beira by helicopter. The scale of the devastation inflicted on the port city by Cyclone Idai was all too clear Monday in this shot from a Red Cross Red Crescent drone. (Photo: IFRC)