Brief: A quarter of DREF funding will eventually be for early action 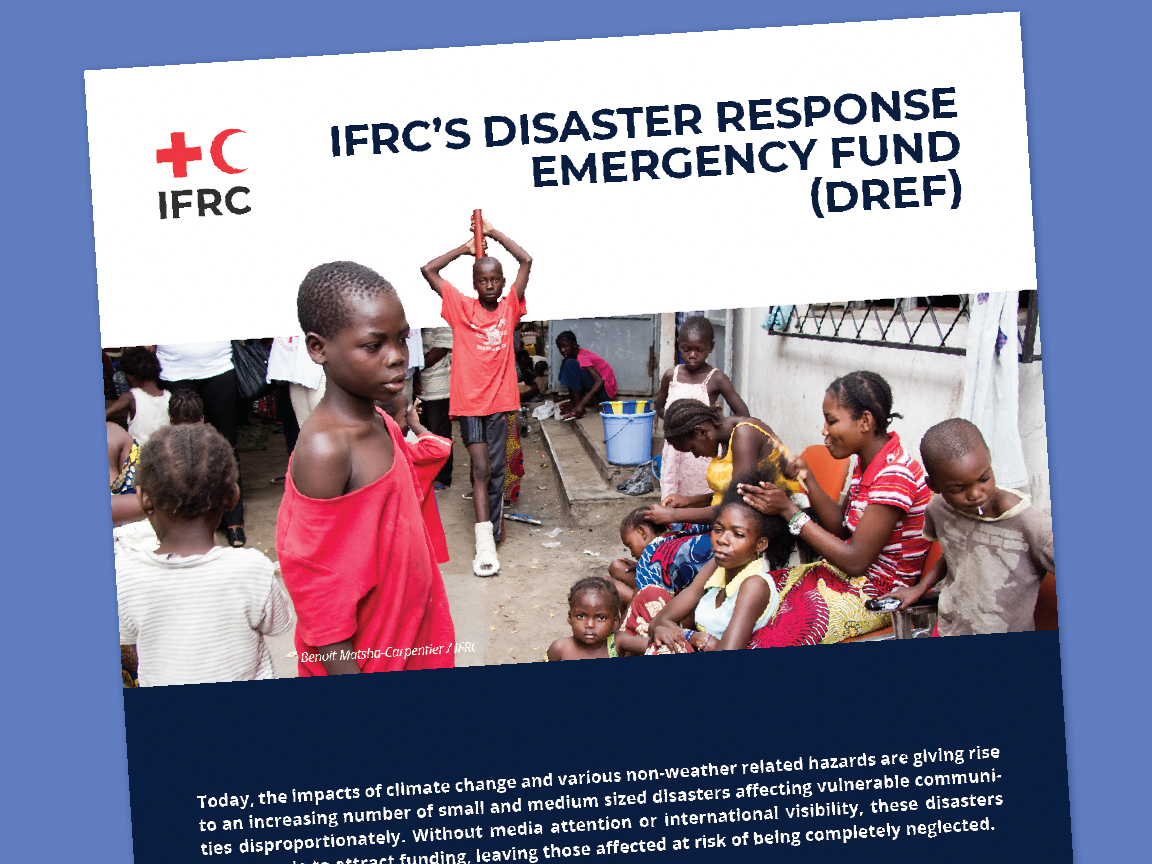 Climate change and various hazards unrelated to weather are giving rise to an increasing number of small- and medium-sized disasters, and lacking media or international visibility they struggle to attract funding.

That is one of the principal conclusions of a new brief (image) from the IFRC’s Disaster Relief Emergency Fund, issued last week, which says that DREF is “the simplest, fastest and most transparent way” for National Societies to access reliable, short-term emergency funding for community action.

The 35-year-old fund, which was expanded in 2018 with German support to incorporate forecast-based action, provides National Societies with finance for local responses to just such smaller-scale disasters when no emergency appeal is likely or when support from other donors is not foreseen.

It also provides pump-priming funds for larger responses that are later reimbursed from emergency appeals, and resources for early action protocols (EAPs) or imminent crises.

Figures provided in the new brochure show that DREF last year allocated more than 40 million Swiss francs in support of nearly 140 operations through 31 loans to emergency appeals and 105 grants, including forecast-based action.

This effort enabled National Societies on the ground to reach nearly 13 million million people in 88 countries.

The brief adds: “On average, 70 per cent of DREF allocations are made for climate and weather-related events – usually of a recurring nature such as floods or droughts,” as well as transport accidents, population movements, civil unrest and disease.

It continues: “An increasingly large part of the DREF is committed to anticipatory action, where financial resources are agreed in advance and released automatically once a trigger is reached…”

In 2021, ten new EAPs were approved together with 13 allocations for imminent crises.

It’s intended that about a quarter of future DREF funding will be for early action with “increased allocations for imminent events and [forecast-based action through] changes that increase its efficiency, relevance, agility and coverage.”

In one of three short case studies from last year and 2020, the new brief says nearly 750,000 Swiss francs were allocated to the Syrian Arab Red Crescent to support 15,000 people with food security, hygiene and health awareness as the tenth anniversary of the civil war coincided with “the worst drought to hit the country in 70 years”.

Ahead of the worst of the winter in Mongolia, an early action protocol enabled the Red Cross to give cash and veterinary kits to 2,000 herder households in the most at-risk areas.

And DREF allocated nearly half a million Swiss francs to the Tanzania Red Cross to support communities displaced by the heavy rains and floods in the Lindi region; the DREF enabled them to start again and build new shelters, and a year later the community spontaneously cooperated to create the new Kipindimbi branch of the Red Cross.