‘From Iraq and Pakistan to the Caribbean, climate change is driving threats of new insecurity and violence, security analysts say’ 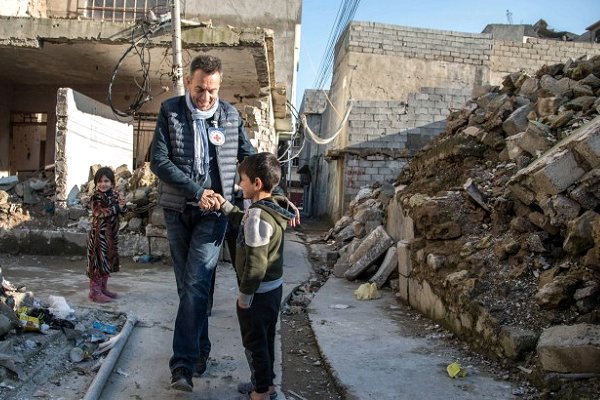 (This story appeared first on Tuesday on the website of the Thomson Reuters Foundation; it has been edited slightly here for length.)

“Climate change is not about something in the far and distant future. We are discussing imminent threats to national security,” said Monika Sie Dhian Ho, General Director of the Clingendael Institute, a Dutch think tank.

“People are already deprived of a basic livelihood,” the geography professor said at a conference on climate and security at The Hague. “If you give them a little money and tell them to destroy this or kill that, they are ready to do it.”

“Overall we are getting less by nearly 40 per cent of the water we used to get,” he told the conference.

Shoring up the country’s water security, largely by building more storage and cutting water losses, will take nearly US$ 80 billion through 2035, he said.

The threat of worsening violence related to climate change also extends to countries and regions not currently thought of as insecurity hot-spots, climate and security analysts at the conference warned.

“We’re facing an existential crisis in the Caribbean,” said Selwin Hart, the Barbados-born Executive Director of the Inter-American Development Bank.

Ninety per cent of the region’s economic activity – particularly tourism, fishing and port operations – takes place on the threatened coastline, he said.

Hurricanes, in recent years, have flattened the economies of some Caribbean nations, with Hurricane Maria in 2017 costing Dominica about 225 per cent of its GDP, according to World Bank estimates.

But as the global emissions that drive climate change continue to rise, “there’s not a realistic chance of achieving the goals of the Paris Agreement”, Hart suggested.

The failure to cut emissions means the Caribbean, while doing what it can to become more resilient to the growing risks, also needs “to plan for the worst-case scenario”, Hart said.

It is trying to do that by building coordination and assistance networks among Caribbean states and looking to shore up access to food and water, among other changes, said Ronald Jackson of the Caribbean Disaster Emergency Management Agency.

And the work has to be done quickly, he said. Last October the world’s climate scientists warned that to hold global temperature hikes to 1.5 degrees Celsius, energy systems would have to dramatically shift in the next dozen years.

Military officials around the world have increasingly recognized the risks associated with climate change, and moved to shore up bases against sea-level rise, curb military emissions, adopt clean energy and analyse changing risks.

At the Planetary Security Conference at The Hague on Tuesday, they announced the creation of a new International Military Council on Climate and Security, made up of senior military leaders from around the world.

In the organization’s first intervention on climate at the Security Council, the ICRC’s Permanent Observer at the UN, Robert Mardini, late last month said war deepened community vulnerability to climate change, the Climate Centre’s Julie Arrighi adds from The Hague.

Mr Mardini, a former director of the International Committee’s Middle East operations, said that “in situations of armed conflict…countries, communities and populations are the least prepared and the least able to protect themselves and adapt.”

ICRC President Peter Maurer (pictured with 8-year-old Ali in Mosul) said during a visit earlier this month that rebuilding Iraq’s social fabric is key to ensuring the country can leave its violent past behind. Conditions had to be right for displaced people to return home, including housing, health care, livelihoods, the clearing of unexploded ordnance, and also drinking water supplies now threatened by climate impacts. (Photo: Ibrahim Sherkhan/ICRC)