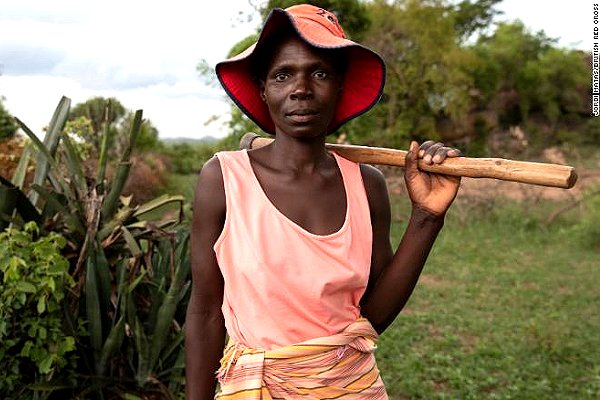 A CNN International Edition report says a community-resilience programme run by a partnership of the Zimbabwe and British Red Cross “could have a huge impact on the triple challenge of climate change, food security and HIV”.

The report yesterday, from Zimbabwe’s southern Mwenezi district by correspondent Jacqui Thornton, says “climate-smart agriculture techniques” are being taught at the Red Cross Farming Centre of Excellence at Neshuro town, one of the drought-prone region’s main commercial centres.

Mulching, for example, enables subsistence farmers to “trap moisture into the soil,” Thornton reports, “as well as using short-season varieties that ripen in two months instead of six.”

One farmer interviewed by CNN planted two fields with maize last year, one in the traditional way and one using new skills acquired at the Red Cross-run centre.

“The difference couldn’t be clearer: while many shoots in the traditional field are just starting to poke through the earth, the climate-smart maize has ripened and is a foot higher.”

Through diversifying from maize, this farmer “has also been able to sell 10 to 15 kilograms of velvet beans beyond what he needed for his family and income.

“As a result, he has been able to build an extra room on his house and pay all of his children’s school fees.”

The CNN report says that because of increasingly erratic rainfall, some farmers are giving up on cultivation without irrigation in favour of livestock that can survive on limited grazing.

It says climate impacts have got worse in the past five years; the November rainy season can begin as late as January – “and when it comes, there’s less of it, sometimes falling for just one day,” CNN is told.

Climate Centre Director Maarten van Aalst told CNN it was clear there was increased uncertainty about the weather, but “while it’s known that climate change is bringing more heat and a rising risk of drought to this area, there is no clear scientific evidence about changes in hail or strong winds [reported by local people] – mainly because researchers don’t have the data.”

The network says the Zimbabwean government is estimating that at least 2.4 million people in rural areas will face “acute food insecurity at the peak of the current ‘lean season’ of January to March.”

It also quotes Red Cross volunteer Musa Sibanda, 56, as saying that she commonly sees people living with HIV facing medical complications because lack of food reduces the effectiveness of their treatment.

Some people with HIV also rely on selling food to pay for transport to collect medication.

Tarisai Mubhoyi, 43, a smallholder and mother of five, who lost her husband to AIDS in 2008, told CNN she has skipped her HIV pills to avoid side-effects when she lacks food. “To get enough food without the rains is close to impossible,” she said. But she now has a fairly regular supply of tomatoes, okra and spinach after Red Cross volunteers showed her how to establish a keyhole garden using waste household water to grow vegetables. “We’re having better meals at more regular intervals,” says Mubhoyi, who has also planted drought-resistant, short-season crops such as ground nut and millet. (Photo: BRC)