‘The world from which the humanitarian system emerged no longer exists’ 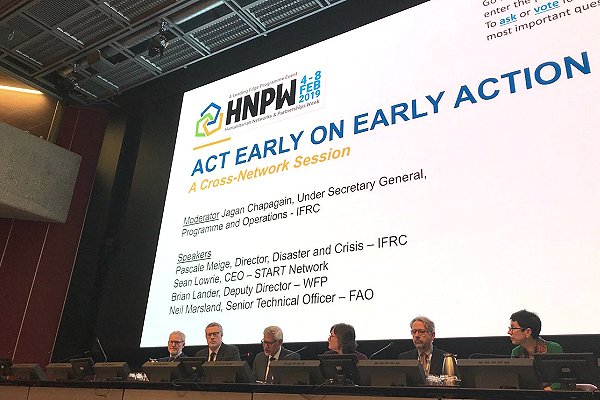 This year’s Humanitarian Networks and Partnerships (HNPW) week in Geneva Wednesday heard calls from senior panellists for the refining and expansion of anticipatory humanitarian action, including from Pascale Meige, IFRC Director of Disaster and Crisis Prevention, Response and Recovery.

An Act early on early action session covered “key contributing elements” to effective anticipatory action, according to the agenda, including risk monitoring, science-based triggers, and – the point at which donor funding often stopped, Meige said – ongoing general readiness to act.

It was opened by the UN Assistant Secretary-General for Humanitarian Affairs and Deputy Emergency Relief Coordinator, Ursula Mueller, and chaired by Jagan Chapagain, IFRC Under Secretary General for Programmes and Operations.

Sean Lowrie, CEO of the START Network, a joint HNPW organizer, explaining how anticipation had been integral to his network’s development, said “the world from which the [humanitarian] system emerged no longer exists”.

He added: “We’re now in the START Network building ‘Anticipation 2.0’. We’re going to design and build a financing facility with the World Bank this year that will be available to the membership of the START Network and civil society.”

‘It is about respect, about listening,
and it is about impact’

The senior panel also included the Deputy Director of the World Food Programme, Brian Lander, and Neil Marsland, a Senior Technical Officer with the UN Food and Agriculture Organization – with OCHA and the IFRC both also joint organizers of the week; these five agencies make up the Focus Task Force on Early Action.

Thomas Henszchel of the German Federal Foreign Office stressed that all stakeholders needed to coordinate their involvement in these relatively new areas.

Other networks involved in setting up Wednesday’s session include the Inter-Agency Standing Committee’s reference group on risk, early warning, and preparedness, the German-supported FbF Dialogue Platform, and the Forecast-Based Warning Analysis and Response Network.

Also at HNPW this week was the IFRC’s Under Secretary General for Partnerships, Jemilah Mahmood, who told a specialist panel: “The question of localization is about how we can make our assistance as effective and efficient as possible. It is about respect, about listening, and it is about impact.”

Arguing that disasters are now growing in “number, scale, severity and complexity”, the IFRC and other agencies tweeted a video presentation on moving from early warning to early action.

The week included technical meetings on hydro-meteorological and humanitarian cooperation with the World Meteorological Organization, facilitated by the Climate Centre.