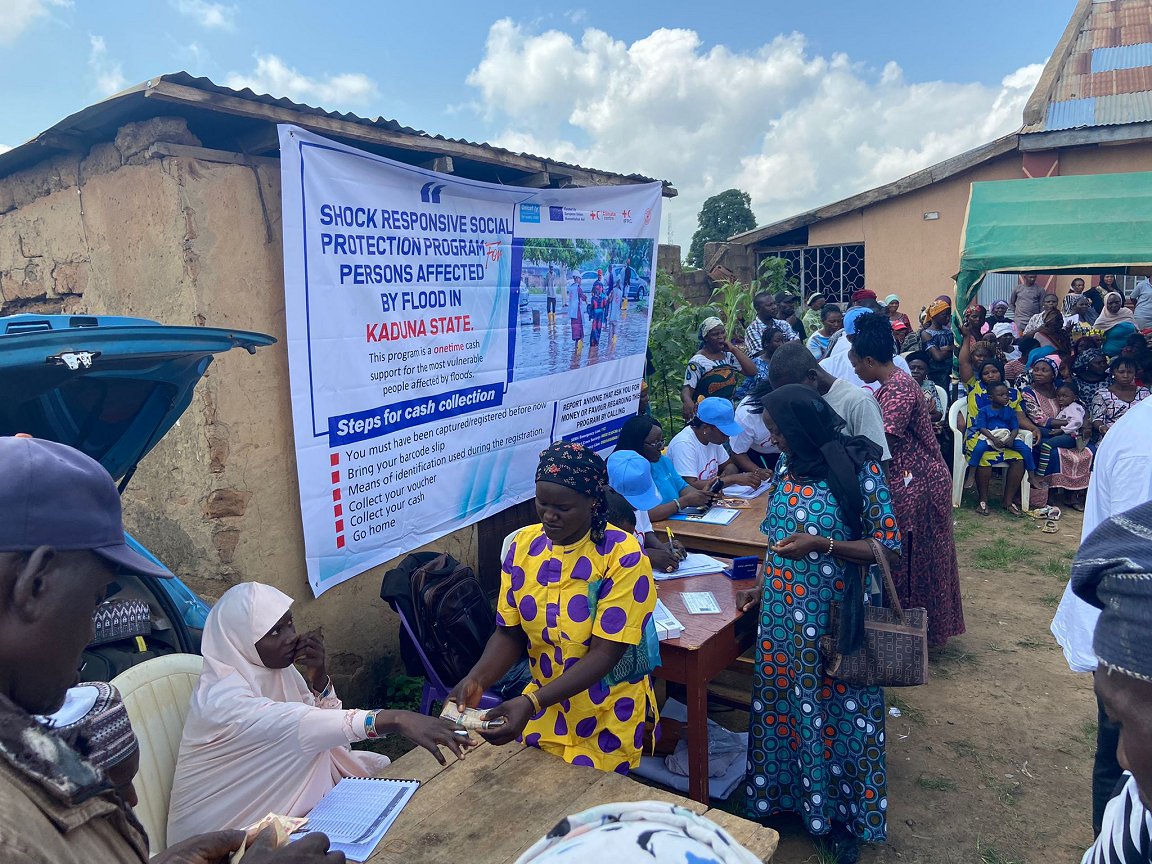 The Nigerian Red Cross in central Kaduna city earlier this week completed a humanitarian cash distribution triggered by a local forecast to beneficiaries from 5,000 households which had been registered in May as vulnerable to floods.

The pilot is part of a programme on flood-related shock-responsive social protection supported by the European Commission and implemented by the NRC in partnership with UNICEF, the IFRC and the Climate Centre.

It’s hoped the experience will help shape the climate responsiveness of the national cash transfer programme in Nigeria – the largest safety net in the country aimed at reducing poverty.

It was only the second time such an exercise involving the Red Cross Red Crescent has been carried out anywhere in the world, after a similar intervention in Nepal last year, again supported by the European Commission.

Severe weather has been affecting Nigeria since mid-July, triggering floods and incidents that have caused casualties and damage, the European Commission said Wednesday in its most recent update.

Yobe state is among the most severely hit areas, according to the International Organization for Migration this week, seeing 31 deaths and nearly 6,000 people affected in 16 IDP camps.

The forecast-based trigger for the social-protection exercise was activated locally on 2 August and showed an elevated flood risk that continues in parts of Kaduna city, the capital of Kaduna state.

Beneficiaries received the local currency equivalent of just over 80 euros; they had been selected by the Red Cross using social criteria such as existing poverty, gender, number of children, disability, and vulnerable elderly.

This was in addition to the climate vulnerability that all selected communities faced, identified in an earlier mapping of flood risk by the Climate Centre.

The logistics of the cash distribution were supported by the United Bank of Africa, and a possible next step is to identify households already registered with the national cash programme that are also vulnerable to floods.

The European Union said Tuesday it’s providing €70,000 as emergency preparedness to reduce the impact of floods in Nigeria through “increased community awareness, prepositioning of stocks, mapping of evacuation centres and hygiene promotion”, assisting 35,000 people and as part of its overall contribution to the IFRC’s DREF.

“In the past decade, especially during the last three years, there has been an observed pattern of flooding in Nigeria, with floods becoming the second most recurrent hazard affecting the country after epidemics,” an EU press release added.

“The high flooding period generally recorded from August to October is usually characterized by the collapse of major dams, overflow of riverbanks and heavy occupation of residential areas,” all of which highlighted the need to anticipate hazards and prepare earlier in areas at risk.

Kaduna residents registered as vulnerable to floods line up this week to receive a cash grant from the Nigerian Red Cross triggered by a flood forecast. (Photo: NRC)