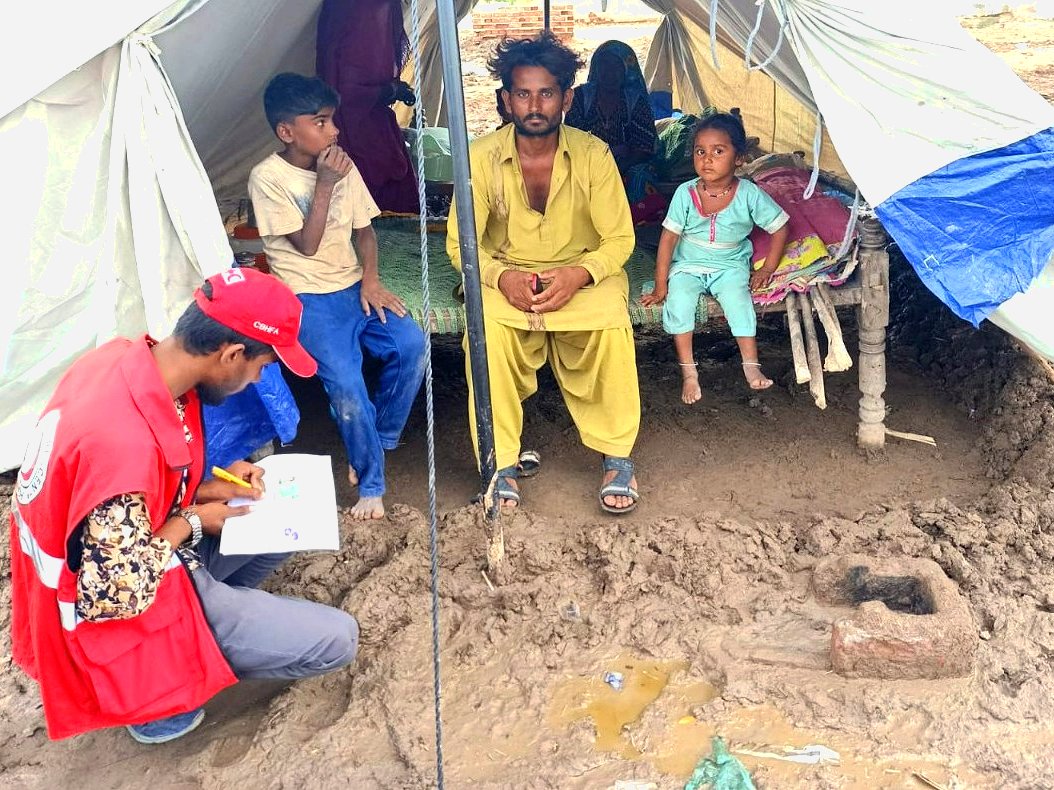 A new study from the World Weather Attribution group of international scientists today found climate change probably intensified the rainfall that left huge swathes of Pakistan underwater and has displaced millions of people.

The country received more than three times its usual rainfall last month, making it the wettest August since 1961, while the southern provinces of Sindh and Balochistan saw their wettest August in recorded history.

Intense local rainfall triggered flash floods that crashed through cities, causing destruction likened to an earthquake, as well as landslides and a glacial lake outburst, while the River Indus burst its banks across thousands of square kilometres the length of the country.

The IFRC has appealed for 26.5 million Swiss francs to help the Pakistan Red Crescent provide urgently needed relief for more than 300,000 people.

The Red Crescent, which has launched its own domestic appeal, says in its most recent update that it has now provided food to nearly 56,000 people, but millions have been washed out of their homes.

The Pakistan government has said at least 33 million people have been affected in all but 50 of the country’s 160 districts, with Sindh – which consists mainly of alluvial plain flanking the Indus – the worst-hit province.

Climate change minister, Sherry Rehman, has described the disaster as “the climate catastrophe of the decade” and “a superflood to beat all” – a reference to the 2010 disaster that became known as Pakistan’s superflood and followed a similar pattern.

Health officials have this week reported surging dengue, malaria and gastric infections two months after the onset of the disaster, with many villages still submerged by the floods and hundreds of thousands of people sleeping in the open, many near stagnant floodwater.

“The monsoon floods have exacerbated existing socioeconomic vulnerabilities and the limited climate adaptation capacity and resilience of exposed households and communities,” the IFRC appeal says.

“The country’s already fragile public healthcare system and struggling economy had not yet recovered from the drastic impacts of Covid-19…halting any progress made within the short-lived recovery phase since the fifth wave of Covid-19 earlier in 2022.”

A WWA press release said today: “Extreme rainfall in the region has increased 50–75 per cent and some climate models suggest this increase could be entirely due to human-caused climate change, although there are considerable uncertainties in the results.”

A WWA team member, Friederike Otto, Senior Lecturer in Climate Science at London’s Imperial College, said: “Our evidence suggests that climate change played an important role in the event, although our analysis doesn’t allow us to quantify how big the role was.

“This is because it is a region with very different weather from one year to another, which makes it hard to see long-term changes in observed data and climate models.

But the floods in Pakistan are exactly what climate projections have been predicting for years, she added, in keeping with historical records showing that heavy rainfall has dramatically increased in the region since people started emitting large amounts of greenhouse gases into the atmosphere.

The latest WWA study was carried out by 26 scientists from universities and meteorological agencies in Denmark, France, Germany, India, the Netherlands, New Zealand, Pakistan, South Africa, the UK and the US.

Fahad Saeed, a WWA researcher at Islamabad’s Center for Climate Change and Sustainable Development, said: “The fingerprints of climate change in exacerbating the heatwave earlier this year and now the flooding provide conclusive evidence of Pakistan’s vulnerability to such extremes.

“Being the chair of G77, the country must use this evidence in COP27 to push the world to reduce emissions immediately.

“Pakistan must also ask developed countries to take responsibility and provide adaptation plus loss and damage support to the countries and populations bearing the brunt of climate change.”

“The rainfall was very extreme, but there are many measures that can prevent such massive damage in the future.

Pakistan Red Crescent volunteers register arrivals at a tent city the National Society has established at Mirpur Khas district of Sindh – the worst affected province in the latest historic flood-disaster to affect the country. (Photo: PRCS via social media)