‘Conflict and climate nexus’ unpacked at Nairobi high-level round table 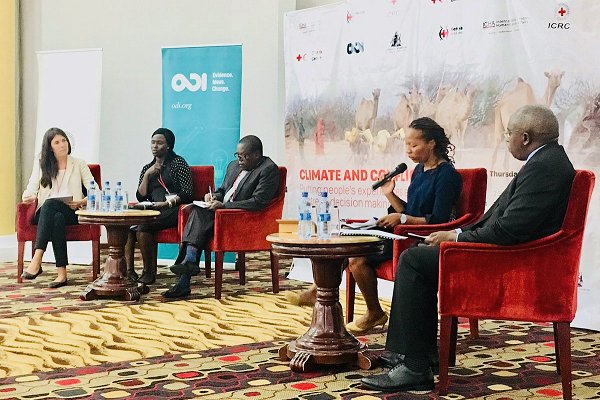 The first of a 2019 series of high-level round tables on the interconnected vulnerabilities and impacts of climate and conflict was held in the Kenyan capital, Nairobi, yesterday, amid heightened security after the attack in the city earlier this week.

Opening the round table at the Kenya Red Cross Society’s Boma conference centre, KRCS Secretary General Abbas Gullet called for the humanitarian community to make use of data on both climate and conflict “for better prediction of patterns of vulnerability”.

A key message in a briefing note prepared for the round table – the first of a global series, with others planned this year in Geneva and Manila – says that while attention for the climate-security nexus has been generally growing, “there has been relatively limited attention to the humanitarian implications of these changing risks.”

This “double vulnerability”, it argues, has up to now been viewed largely through the prism of security.

An adapted version of the briefing, including insights from stakeholders who took part in the Nairobi event, will be published shortly.

“When you think climate change and armed conflict, think about double vulnerability,” the Director General of the ICRC, Yves Daccord, tweeted from the Kenyan capital.

In his own opening remarks on how, as he put it, to “operate and finance action on climate in conflict settings”, Daccord told the round table that climate change was “a multiplier of vulnerability for people and communities affected by war”.

It was time to foster new sustainable humanitarian solutions, he said, adding that: “Protracted conflicts require long-term interventions to build resilience in the context of responding to conflicts.”

The round table also discussed how climate finance can increase people’s adaptation and resilience.

The humanitarian system is already under heavy strain made worse by growing climate risks, especially in conflict areas, said the round-table organizers – the KRCS and its International Center for Humanitarian Affairs, the ICRC, the Climate Centre, and the UK Overseas Development Institute (ODI).

In areas like South Sudan and Somalia, for example, the complex relationship between climate, livelihoods and conflict is receiving increased international attention, but climate-affected populations may be missing out on global finance to support local action to address rising risks.

Participants considered how best to support vulnerable groups in these and other conflict countries that have also faced floods and droughts in recent years.

The ODI’s Katie Peters tweeted from Nairobi that climate change had “altered the risk profile of vulnerability and humanitarian crisis, and the political, institutional and financial context in which humanitarian systems operate.”

Also yesterday, a parallel discussion open to the public involving policy-makers, humanitarians, teachers and students went ahead at the University of Nairobi’s Chiromo campus, where they discussed the joint impact of climate and conflict on communities in, especially, East Africa.

The Chiromo workshop was also jointly organized by the university’s Institute for Climate Change and Adaptation.

It was designed to “explore the humanitarian consequences of conflict and climate risks and how the international community can help people adapt and be less vulnerable,” the partners said.