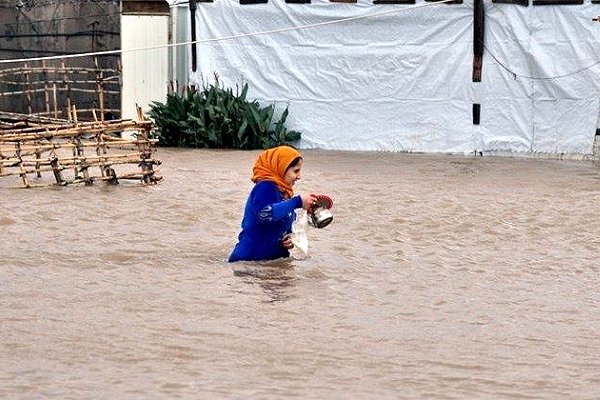 The Red Cross Red Crescent across the Asia Pacific region and in the Middle East have been helping people prepare for and cope with damaging extreme seasonal-weather – ranging from extreme cold and snow to storms and flash floods.

Most recently the ICRC in Lebanon yesterday tweeted that Storm Norma had left almost 600 Syrian refugee families in Aarsal, in the north-east of the country, one of the worst affected areas, without bread or fuel for heating.

“Most tents have been damaged by the weight of snow” and some destroyed, the International Committee said.

On Tuesday the Lebanese Red Cross rescued more than 700 people from the Semmaqieh refugee settlement, in Akkar district, after their tents filled with floodwater as Norma swept across the country at the weekend.

The UN refugee agency says at least 66 informal settlements have now been badly affected by flooding, 15 of which have collapsed or been totally inundated; some 300 people in the north and the Bekaa Valley area have been relocated.

In a major preparedness exercise, the Bangladesh Red Crescent earlier this week was distributing blankets to 50,000 vulnerable people throughout the country ahead of a cold snap forecast by the Bangladesh Meteorological Department.

Exactly a year ago, Bangladesh experienced a cold wave that reports said broke all records and killed nearly 30 people.

The Sri Lanka Red Cross Society, meanwhile, now cites reports saying 100,000 people were displaced by flash floods in the north of the country late last month after a period of “incessant rain”.

A National Society post tells the story of 32-year-old Uthayasanthiran Rakuwaran, in Mullaitivu district, one of several badly affected, whose two-year-old daughter Kamsana was killed by a tree uprooted in the floods.

The Red Cross in Fiji, Kiribati, the Marshall Islands, Solomon Islands, and Vanuatu have been actively preparing for and responding to severe weather, including Tropical Cyclones Penny and Mona.

And the Philippine Red Cross has been continuing to provide humanitarian support to tens of thousands of families in 14 provinces affected by Tropical Depression Usman, which made landfall near Borongan, on eastern Samar island, on 29 December.

Floods and landslides triggered by the storm killed at least 140 people, the UN said today, and displaced thousands of families, while the IFRC has already released a quarter of a million dollars in humanitarian cash.

“Simple cold waves are actually expected to lessen in intensity and frequency with warming, yet the quantity of rainfall embedded in storms is likely to increase.

“In the short term, probably the most important point is the vulnerable contexts, such as the refugee settlements in Lebanon, poverty in Bangladesh, and fragile homes right at the water’s edge in the Philippines – these we can and should seek to address before extremes strike.”

A refugee woman wades through floodwater in a settlement in northern Lebanon this week. The ICRC says hundreds of Syrian refugee families in one location have been left without food or fuel, while many tents have collapsed under the weight of snow. (Photo: @MedGlobalOrg via Twitter)