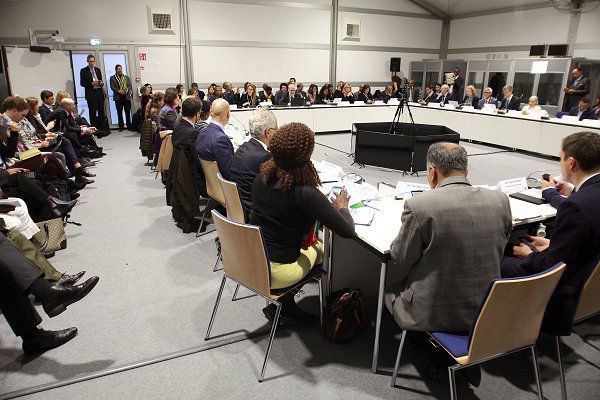 The UN yesterday issued an official outcome document from the Marrakech Partnership round table on resilience held at COP 24 in Katowice that included the IFRC, the Climate Centre and PfR agency Wetlands International. It reflects many of the key messages that emerged there from the humanitarian sector.

A total of 32 stakeholders presented at the round table, including government, the private sector, financial bodies, grass-roots and civil society groups, NGOs, academics, faith-based institutions, and think tanks.

It focused on “actions that public, private and community actors are taking…to accelerate investments to meet the needs of the most vulnerable people and countries to enhance climate resilience,” according to the new document.

“The recently released IPCC 1.5 degree report was welcomed [at the round table] as strong evidence for urgent climate adaptation and resilience action…also essential for mitigation and vice versa,” it adds.

“There is clear urgency to scale up investment…in energy, land use and ecosystems (including oceans), human settlements, infrastructure and industry.”

Paying special attention to the most vulnerable people and states, the partnership document says “adaptation and resilience building are understood as the foundation and cornerstone of sustainable development.

“The focus shall not be on the cost, but on the economic and social benefits of adaptation and resilience.”

IFRC Under Secretary General Jagan Chapagain told the Katowice round table that “we need to move from debating value for money to value for people” – a view now explicitly endorsed in the outcome document.

Referring to the IPCC report, he said vulnerable people already disproportionately affected by climate impacts – from the Pacific Islands to those living on mountain slopes facing yearly landslides – couldn’t choose whether it “was welcomed, noted, or ignored – it’s there and they are being affected.”

Other key messages in the outcome document include the expansion of “ambitions leading up to the UN Secretary General’s 2019 climate summit and beyond”.

Echoing the theme of the current IFRC World Disasters Report, one key message in the document is: “Leave no one behind: ensure climate resilient action agendas are truly inclusive of the voices and the experiences of the most vulnerable…”

It calls for support for community leadership in climate action, better use of  knowledge drawn from traditional and indigenous sources, and protection of the “natural resilience that already exists in terrestrial and marine ecosystems”.

The Marrakech Partnership also wants to carry on building “a common local-to-global dialogue and understanding of climate resilience” in the style of the Talanoa dialogue.

Among the short-term priorities it lists for 2020 is the scaling up of “flexible financing mechanisms such as forecast-based financing and early warning early action in the most vulnerable countries and at-risk communities”.

The round table on resilience alongside the UN climate talks convenes in the southern Polish city of Katowice last month – part of the Marrakech Partnership for Global Climate Action; it heard a wide range of views on scaling up action on and investment in climate resilience. (Photo: Climate Centre)