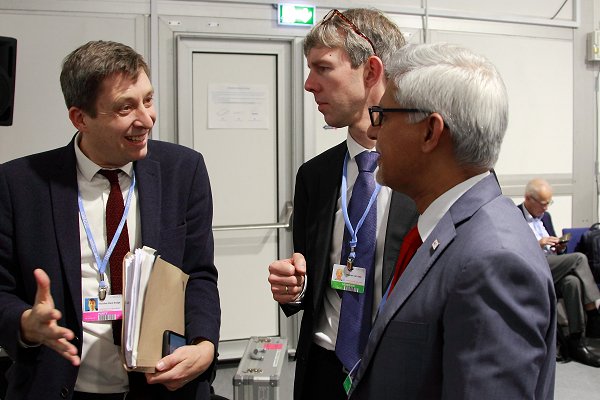 (This article appeared frst in the print edition of the latest Red Cross Red Crescent magazine, jointly published by the ICRC and IFRC in Geneva.)

One degree Celsius. It doesn’t sound like much. Most of us wouldn’t even notice if the air around us went up or down by that amount. Nearly everywhere on Earth, the thermometer goes up and down far more than that just between daytime and night.

But it’s a very powerful number: 1°C is the average amount that global temperatures have risen since pre-industrial times due to human activity.

And what a difference a degree makes. Temperature is an expression of energy, and when more energy is put into the atmosphere, the land and the oceans, weather patterns change.

Heatwaves get more extreme and periods of rain and floods are more intense and unpredictable, while other areas may face longer drops, aggravated by a higher temperatures. Ocean currents are altered and sea levels rise, sending storm-surges further inland.

We are already seeing the impacts. Droughts are creating perfect conditions for wildfires, from Indonesia to the Arctic Circle in Sweden. The powerful tropical storms last year that devastated coastal communities and caused record damages are now three times more likely due to climate change.

How could it be that such a seemingly insignificant difference in temperature has such a powerful impact, especially when that change has happened over more than a century?

We can reduce and manage the risks
if we’re willing to take the big steps necessary.
The coming decade will be crucial

We have to understand that the 1°C figure is an average. Oceans warm more slowly than land but, in some regions, average land temperatures have already risen by more than 3°C in the last 150 years.

And temperature rise is not steady. We see much more rapid changes in the extremes. In the last few years, record-setting – even life-threatening – hot spells have hit in Canada, India, Iraq, Japan, Pakistan and the United Kingdom, among others.

So what happens when global temperatures rise, as predicted, even further? This was exactly the question put to the Intergovernmental Panel on Climate Change (IPCC) as part of the Paris Agreement.

What they discovered should alarm anyone who cares about life on Earth. In short, drastic steps need to be taken to limit temperature rise to 1.5°C, and even then the storms, droughts and other phenomena related to climate change will get far worse

If we limit the rise to 1.5°C, however, we could manage the impacts by climate-proofing our cities, shorelines and farms. If we fail and average temperatures rise by 2°C, the impacts will be far more severe, and even limiting warming to 2°C will require drastic changes in energy use.

But if we continue with the status quo, we are headed for at least 3°C and at this point (and even at 2°C), it will be very difficult and expensive to adapt. Some impacts will likely be irreversible.

The situation is dire. But don’t lose hope. We have momentum. There is growing volume and urgency to calls for an energy transition that prevents even more dramatic consequences. There is an equally urgent call to help the most vulnerable among us adapt. So what do we need to do?

First we need to recognize that climate change is already here; this is no longer a matter for the future.

Second, we need to invest more in prevention rather than just responding to an ever-growing number of disasters. This includes systems that anticipate climate risks and allocate funds for prevention and preparedness before floods, fires and droughts have a chance to wreak havoc.

Third, we need to work together. These are complex problems and they require responses from nearly every sector.

Fourth, we need to flag the particularly harsh impact climate change is having on people living in conflict situations or who are on the move because of violence, insecurity or extreme poverty.

Lastly, we need to show that it’s not just about what we lose if we don’t act, but what we gain if we do. Climate-proofing are economies and our communities will not only save money, it will reduce risk and provide the stability needed to encourage prosperity in place is now too fragile to thrive.

Yes, the IPCC report is scary. It shows how even small degrees of warming carry tremendous consequences. But we can reduce and manage the risks if we’re willing to take the big steps necessary. The coming decade will be crucial.

Dr Maarten van Aalst is an IPCC Coordinating Lead Author; he serves on the scientific advisory group of the UN International Strategy for Disaster Reduction and the leadership group of the UN Climate Resilience Initiative. As director of the Climate Centre he oversees its support to the management of climate risk across the Red Cross Red Crescent Movement. He is pictured, at centre, at COP24 in Katowice last month, with IFRC Under Secretary General Jagan Chapagain and Nick Bridge, UK Special Representative for Climate Change. (Photo: Climate Centre)