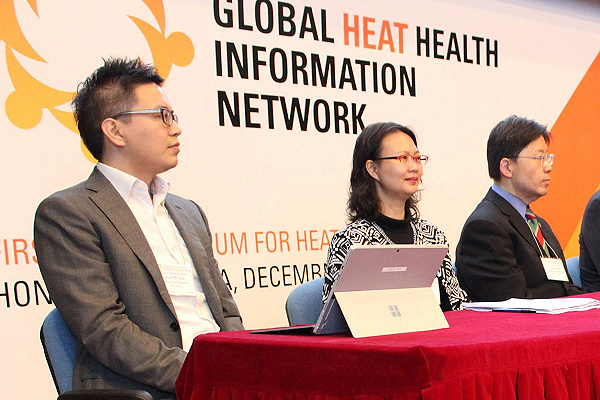 It gathered more than 120 climate and health experts from at least 33 countries, and saw the launch of a professional network intended to build the capacity of governments and other agencies to protect populations from extreme heat.

It’s now expected the meeting will generate consensus recommendations for both the WHO and the WMO to be adopted later this month, as well as new collaboration and networking openings for interested professionals.

Many parts of the world experienced exceptional, prolonged heatwaves and associated wildfires in 2018, said Elena Manaenkova, WMO Deputy Secretary-General, adding that “[h]eat warnings and related weather and climate services are critical to mitigate this risk.”

Candy Yeung, Deputy Secretary-General of the Hong Kong Red Cross (photo), spoke on engaging local communities, and the GRC’s representative in Vietnam – one of the latest National Societies to work on forecast-based financing as a humanitarian operating model – briefed the group on FbF.

Researchers based in Hong Kong – which itself suffered an exceptional heatwave this summer – told the meeting that in densely populated parts of the city, every degree Celsius increase in maximum daytime temperature above a benchmark of just over 28 degrees resulted in nearly a 2 per cent increase in mortality, according to a final press release from the group, who also cited a study showing nearly 160 million more vulnerable people experienced heatwaves in 2017 than in 2000.

A simulation exercise of a catastrophic heat-event with serious casualties, led by the WHO, was designed to prepare government officials and journalists to respond.