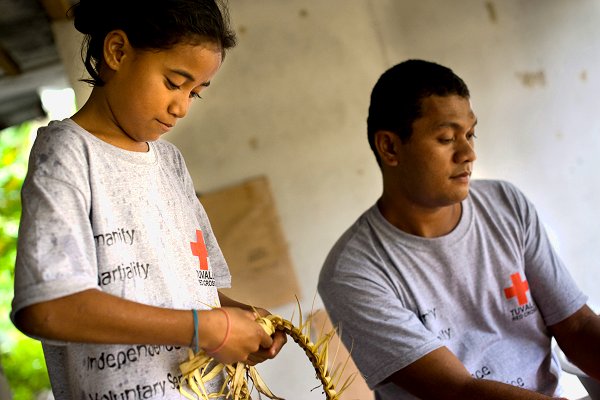 Drought is a tricky hazard to prepare for in the Pacific – a silent, slow-onset disaster whose impacts may appear only gradually over months, making early warning early action difficult.

Now a group of regional agencies have got together to add Tuvalu to the list of Pacific island nations supported with developing science-based early warning for drought and prolonged dry conditions.

The Secretariat of the Pacific Regional Environment Programme, the Pacific Community, the Australian Bureau of Meteorology, the Tuvalu Meteorological Service and the Climate Centre together developed an ‘early action rainfall watch’ for Tuvalu that will provide simple alerts in a bulletin to assist preparedness for drought.

“The Tuvalu EARWatch will be very important to the Tuvalu Red Cross Society,” said Tusi Finikaso, TRCS Climate Change and Disaster Management Officer. The TRCS will next year develop a protocol linking specific early actions to alert levels in the EARWatch.

“This will be an additional piece of information with more details in terms of timescales and a better understanding of the impacts, and people will understand the bigger picture,” Tauala Katea, Director of the Tuvalu Meteorological Service

“Feedback received from stakeholders is that they find this useful, especially with the inclusion of agriculture and health.”

Tuvalu is heavily dependent on rain for drinking water, and in 2011 it was badly affected by a drought linked to La Niña that triggered a state of emergency.

Finikaso added: “With the current strategy of taking the ‘last mile’ first, it will definitely help our communities as they will have an early-warning system that is based on scientific models they can use to determine their actions.

“In Nui and Nukufetau, for example, the branch is keen to use all tools available to them to help or influence activities at the community level.”

A key component of the development of EARWatch has been to understand the relationship between a developing drought and its impacts: the atoll soils of Tuvalu do not hold moisture well and it takes less than a month for crops with shallow roots to become water-stressed.

Breadfruit, however, a staple food in Tuvalu, from trees with deep roots, copes better and is affected only after months of drought; other crops lie somewhere between.

Droughts can also have socio-economic impacts, and during extreme events the number of visitors can be restricted, community gatherings are cancelled, and schools and government offices are closed.

The November workshop, which also included educational games, built on regional training provided by SPREP and the Climate Centre earlier in the year.

“Paying for Predictions was a good game for disaster stakeholders [last month] as it gave them the opportunity to experience consequences both of preparedness and inaction,” said Finikaso.

EARWatch for Tuvalu is supported by the Australian Department of Foreign Affairs and Trade, which is also assisting with equivalents for the meteorological services of Fiji, Papua New Guinea, Samoa, the Solomon Islands and Vanuatu.

Tuvalu Red Cross volunteers and their children at a training session on communications, staging a competition to send humanitrian information back to base using radio equipment. Now the National Society will have a better insight into the drought hazard that can have severe impacts in a country heavily dependent on rainfall for drinking water. (Library photo: Rob Few/IFRC)