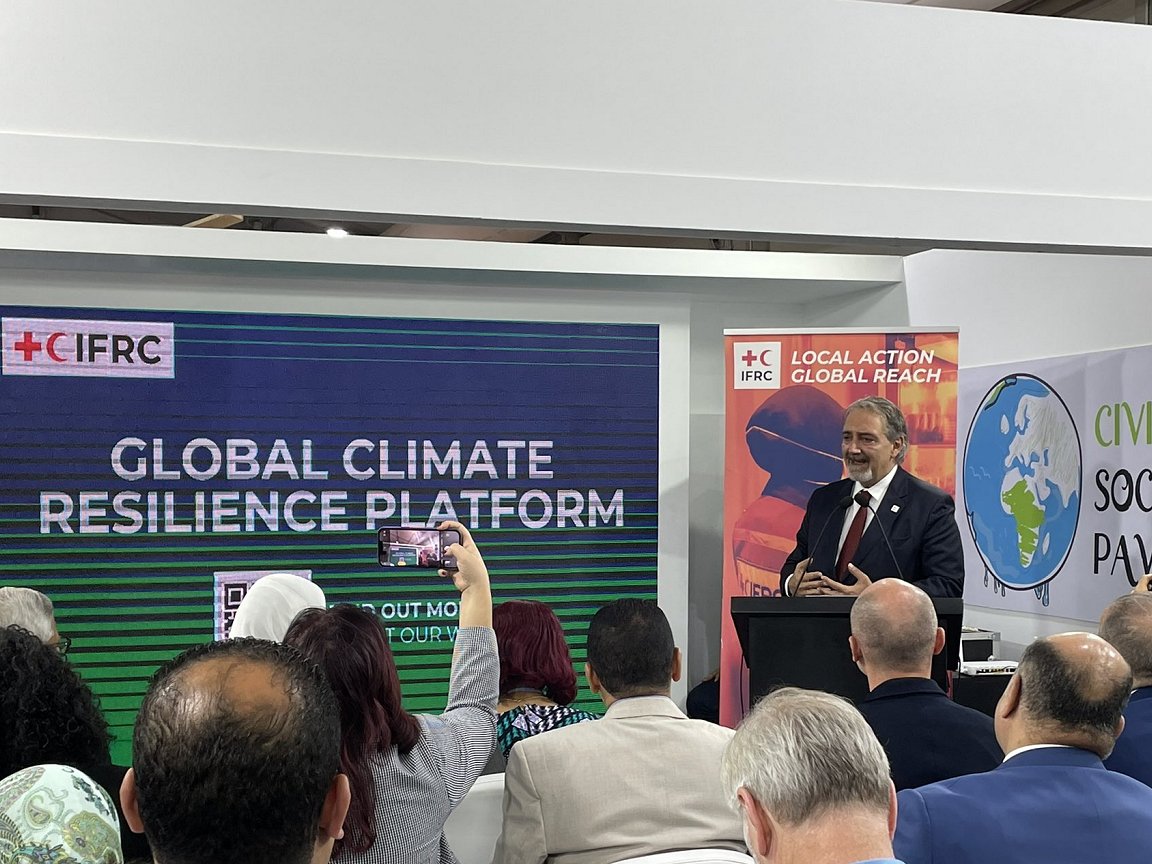 (This story is an IFRC press release issued earlier today from Geneva; it has been edited slightly here for time references. The new platform was also formally launched today at a side-event at COP27 in Sharm El-Sheikh.)

As COP27 gets underway what’s most urgently needed is clear: accelerated investment in communities on the front lines of the climate crisis.

At a make-or-break moment, the IFRC today launched its Global Climate Resilience Platform to increase the resilience of communities most vulnerable to the changing climate.

“Real sustainable change can only happen when the people impacted are driving decisions.

“Funding local climate action without having to go through multiple layers is crucial if we are to be truly successful in building resilience from the ground up.”

Through the platform, the IFRC network will support meaningful participation and the active leadership of women, local communities, indigenous peoples, youth and other marginalized and/or under-represented groups in the development and implementation of locally led climate action in 100 countries most vulnerable to climate change.

IFRC President Francesco Rocca (photo) says: “The critical challenge of this decade is how to support and finance climate resilience initiatives at a global scale. The key is found in the shift of power and resources to local actors.”

The IFRC’s Making it Count: Smart Climate Financing for the Most Vulnerable People report has found that many highly vulnerable countries are not receiving the climate adaptation support they need and are being left behind.

On average, they received less than a quarter of the adaptation funding per person that went to low or very low vulnerability countries.

In addition, only an estimated 10 per cent of funding is granted at the local level as donors instead favour large-scale national infrastructure projects that risk missing the mark for local communities.

IFRC Under Secretary General Nena Stoiljkovic said the platform focused on the key areas that had been identified as having the most potential for transformative impact at scale through increased investment and were expected to generate multiple dividends, including – first and foremost – saving lives.

She noted that the initiative will link sources of funding across humanitarian, development and climate funds as well as innovative financing mechanisms involving the private sector to meet its ambitious but critical targets.

Increased resilience also stimulates sustainable development and innovation and is a more efficient focus in humanitarian response: investing one dollar in climate resilience in communities can save six dollars of investments in disaster response.

IFRC President Francesco Rocca speaking at today’s side-event at COP27 in Sharm El-Sheikh to launch its Global Climate Resilience Platform to increase the resilience of communities most vulnerable to the changing climate. (Photo: IFRC via Twitter)