IFRC at COP resilience event: ‘We need to move away from debating value for money to value for people’ 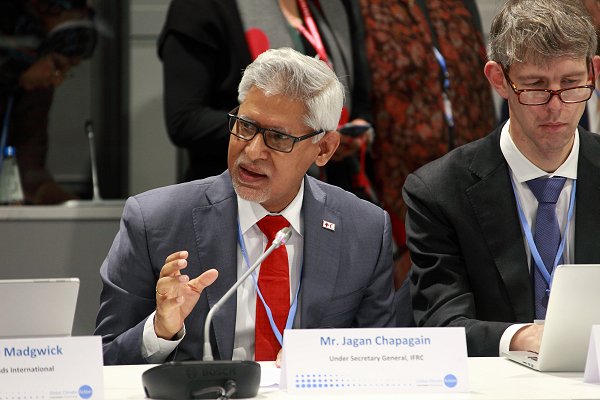 A round table alongside the climate talks in Poland today heard a wide range of views – including from humanitarians – on what the UN called “the urgent need to scale up action and investment into climate resilience across and within sectors”.

The 90-minute session was part of the Marrakech Partnership for Global Climate Action.

Inia Seruiratu, Fiji’s Minister of Agriculture and Disaster Management and a UN High-Level Climate Champion, opened the contributions by summarizing the findings of the IPCC’s recent Special Report on Global Warming of 1.5ºC.

He said science was only confirming what people on the ground in the Pacific already knew, and “to be told that this will only get worse is of course frightening and frustrating as well.

Mr Seruiratu invoked what became a symbol of resilience and unity at COP 23 in Bonn – the traditional Fijian seagoing canoe or drua.

“We are all in the same canoe,” he said, “and we all need to take responsibility. Of course mitigation is good for all of us because more mitigation now means less adaptation in the future, but as a matter of survival resilience and adaptation are critical.”

The round table was moderated by Laurie Goering of the Thomson Reuters Foundation.

In brief two-minute interventions, the meeting heard the views of more than 30 representatives of government, cities, civil society, development and humanitarian organizations, and major private-sector concerns.

Jerome Walcott, for example, the Foreign Minister of Barbados, speaking on the theme of why resilience matters to developing countries, said “climate change significantly endangers the prospects of our achieving the Sustainable Development Goals”.

IFRC Under Secretary General Jagan Chapagain concluded his own contribution by saying that “we need to move from debating value for money to value for people”.

Referring to the IPCC report, he said vulnerable people already disproportionately affected by climate impacts – from the Pacific Islands to those living on mountain slopes facing yearly landslides – couldn’t choose whether it “was welcomed, noted, or ignored – it’s there, and they are being affected.”

The international debate, he added, “should not be mitigation or adaptation; it should be mitigation and adaptation. They have to go hand-in-hand if we are to make a real impact.”

He cited Red Cross Red Crescent forecast-based financing projects as an example of the kind of innovative investment that could make “a huge difference” to people lives, and argued for a better understanding of the links between climate change and conflict.

The multi-agency Marrakech partnership includes both the IFRC and the Climate Centre as well as Partners for Resilience alliance member Wetlands International, whose CEO Jane Madgwick also spoke Monday.

The UK Special Representatve for Climate Change, Nick Bridge, whose government supports specifically climate-resilience programmes such as BRACED, argued for next year’s climate summit to find ways of cutting the cost of disasters, address the “food-water-climate nexus”, and mainstream risk and resilience into investments.

The round table was one of nearly 20 special events the Marrakech partnership is convening in Katowice for COP 24.

(A link to a recording of the full session will appear here when uploaded by the UN.)