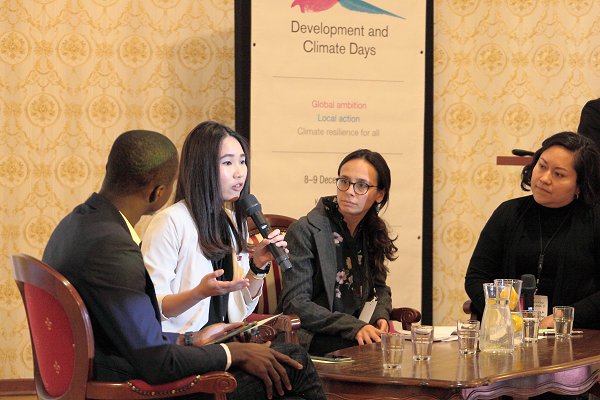 The two-day annual Development and Climate Days workshop opened this morning in Katowice alongside the United Nations climate talks, which come after what the UN has called “a year of devastating climate disasters around the globe, from California to Kerala, and Tonga to Japan”.

In an opening address, Clare Shakya, who leads on climate change at joint organizers, the International Institute for Environment and Development (IIED), said: “There’s a huge opportunity in the coming year in the run-up to the UN Secretary-General’s climate summit to set out climate action that speaks to what’s working in building long-term resilient development and the SDGs at scale.

She called for “critical reflection on what has the potential to be far-reaching, socially just, gender-transformative and far-sighted, and therefore to be robust amid different climate futures.

“Business as usual isn’t working – we need a new vision.”

The 16th D&C Days is the first since the IPCC’s Special Report on Global Warming of 1.5ºC spelt out the likely impacts of specific rises in global temperatures of 1.5 and 2.0 degrees.

“Half a degree matters,” said Bruce Currie-Alder, who leads on climate adaptation in Africa and Asia at Canada’s International Development Research Centre (IDRC), a D&C Days partner agency, who detailed some climatic hotspots where poor and vulnerable people were already experiencing impacts.

“We know, for example, that in the Hindu Kush Himalayan region under the 1.5-degree scenario over one quarter of the ice in those glaciers will disappear; under the 2-degree scenario, about half.”

“What are the implications for the one seventh of humanity that lives downstream and depends on those basins for their water supply?”

The Saturday plenary also heard a selection of compelling national stories from a panel comprising Veronica Rivera of the Guatemala Red Cross Society, Ana Carolina Barbosa Lima of the Fundación Futuro Latinoamericano, Prince Ansah, from the University of Ghana’s Institute for Environment and Sanitation Studies, and Pin Meechaiya of the Bangkok-based Asian Disaster Preparedness Centre.

Climate Centre Director Maarten van Aalst said it would be the task at D&C Days to “build bridges and get connections” between stories such as those and others emerging the formal climate negotiations.

It was also important, he added, to bring forward evidence on solutions, and “one of the things that was so powerful about the IPCC 1.5 report is that it started making those connections.

“We’re in a special timeframe. It’s more clear than ever that time is running out, but the level of ambition is not high enough.”

This, he argued, could be better framed over the coming year if local stories such as those that would be aired at D&C Days could be linked to global processes. “That is our collective job.”

Dr Debra Roberts, who co-chairs the IPCC’s working group on impacts and adaptation, concluded her opening address by saying the underlying message to the world of the SR1.5 report “was that we have to have urgent and far-reaching action”.

She added: “Global emissions have to peak before 2030 in all the pathways that are compatible with 1.5 degrees” and reach net zero by 2050. The headlines that say 12 years to save the world were wrong. “We don’t have 12 years; in fact we probably have 12 minutes.

“If we’re going to achieve a rapid far-reaching transition, we have to start acting now…and we have to focus on ethical and fair transitions.”

UN climate chief, Patricia Espinosa, said earlier this week that climate impacts had “never been worse. This reality is telling us that we need to do much more – COP 24 needs to make that happen”.

UN Secretary General Antonio Guterres told the opening ceremony that it was the “most important gathering on climate change since the Paris Agreement was signed. It is hard to overstate the urgency of our situation.”

Arguing that “we are way off course” on cutting emissions, he called for “transformative climate action in five key economic areas – energy, cities, land use, water and industry.”

D&C Days workshops will cover a wide range of themes, including science, climate and conflict, the role of the private sector, gender, food and nutrition, the Warsaw International Mechanism for Loss and Damage, and communications.

This year’s event is organized through a partnership of the Climate Centre, IIED, Environmental Finance Center West, the UN Food and Agriculture Organization, the Deutsches Institut für Entwicklungspolitik, the Global Facility for Disaster Reduction and Recovery, IDRC, the International Fund for Agricultural Development and the Global Resilience Partnership.

Contributing partners are Action on Climate Today, the Adaptation Network and the Zurich Flood Resilience Alliance.