UR22 blog: What do acrobatics, doughnuts, beach balls and art have in common? 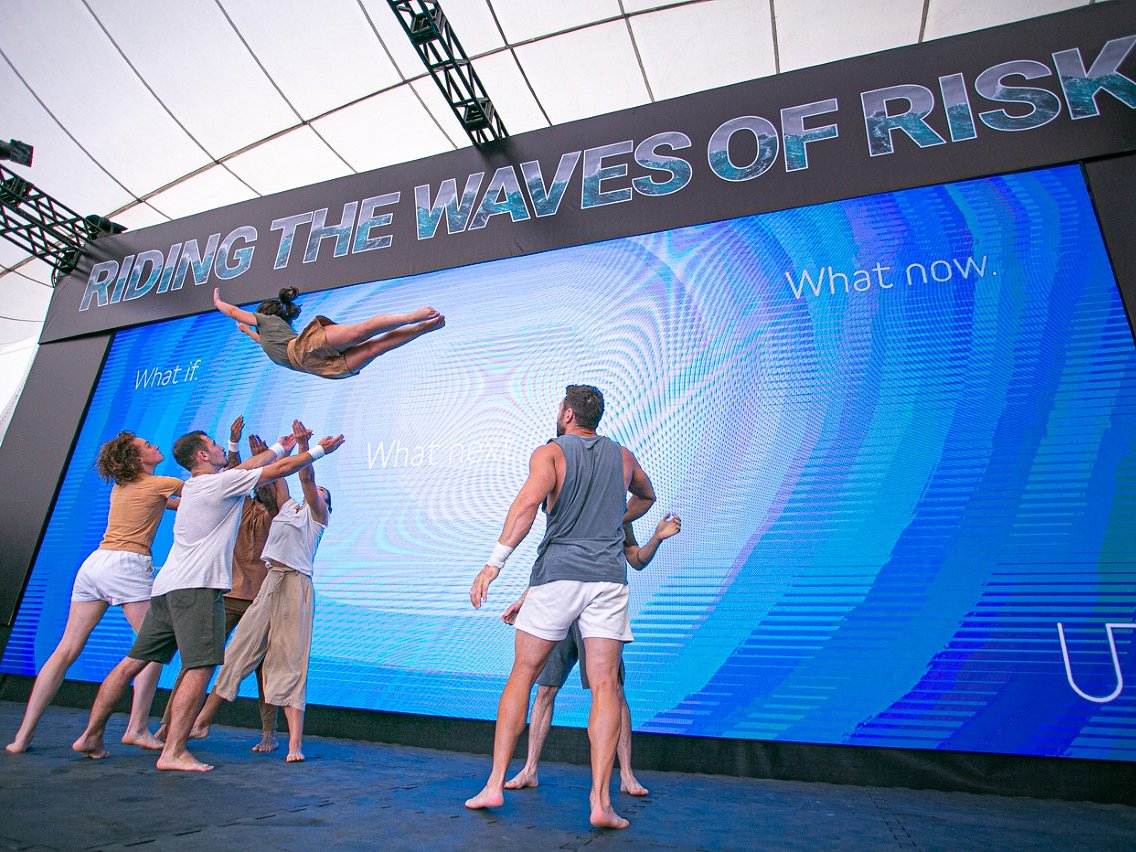 They are all ways to communicate risk.

This was a Climate Centre message at Understanding Risk 2022 which employed these different techniques to examine risk perception and tolerance as well as climate, conflict, epidemics and displacement.

UR22, a forum of the Global Facility for Disaster Reduction and Recovery, was hybrid this year with its main stage that was ending today in Florianópolis, Brazil, and satellite events in London, Niamey, Wellington, and British Columbia.

The Climate Centre joined forces with its supporting partners in the Anticipation Hub to stage multiple events in Florianópolis and as well in London, which it jointly led with the Lloyds Register Foundation and where volunteers and speakers from the British Red Cross also took part.

The Circocan International School of Circus, new Climate Centre collaborators for creative communication on changing risks, put on a spectacular display of acrobatics in Florianópolis – Riding the Waves of Risk – to inspire new thinking (photo).

A tapestry depicting people enduring multiple crises in a changing climate by the Climate Centre’s Rebeka Ryvola de Kremer were also displayed in at the London event.

Jugglers in London – including the head of the Centre for Disaster Protection, Daniel Clarke – and Florianópolis conveyed the idea that when two or more hazards collide or cluster, the collective impact is often greater than the sum of its parts.

Compound risk was the topic of the webcast final plenary in London, exploring how multiple risks can collide and cascade to cause greater harm – particularly to people already facing inequality, discrimination and financial insecurity.

They spoke about underlying drivers of risk and the root causes of disasters, ethics and equity, and risk reduction, offering solutions for a better future, from anticipatory financing to radical economic change.

Now well known in the world of urban planning and economic policy, Kate Raworth’s concept of “doughnut economics” for the 21st century is based on sustainable development goals and planetary boundaries and will be the centre of a collaboration with the Climate Centre next year.

Building from UR22, a joint webinar will lay the foundations for deeper work on climate-related shocks through the prism of doughnut economics.

Aerial acrobat Clara Marquetti of the Circocan International School of Circus flies through the air during a performance at UR22 in Florianópolis. The circus is the newest Climate Centre collaborator in creative communication on changing risks. (Photo: Trovoa/Understanding Risk)