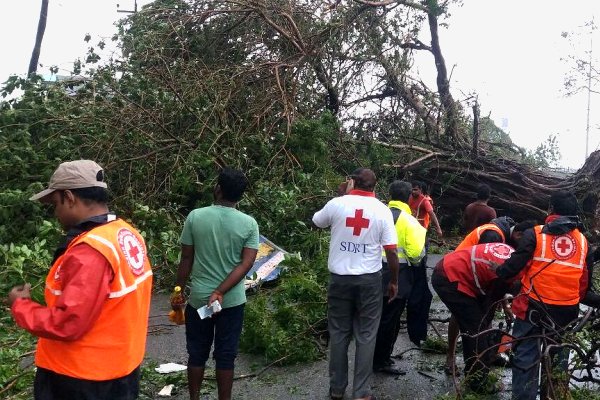 The IFRC today released nearly a third of a million dollars for humanitarian relief by the Indian Red Cross Society (IRCS) after Cyclone Gaja cut a swathe of destruction through six districts of southern Tamil Nadu state and, authorities say, killed 45 people.

The money from the Disaster Relief Emergency Fund will enable IRCS branches in Nagapattinam, Thiruvarur and Thanjavur to assist 3,500 households with the most urgently needed relief supplies such as tarpaulins and kitchen sets.

The late-season monsoon storm made landfall during the early hours of 16 November with wind speeds up to 120 kph.

Dramatic phone video posted on social media revealed the extent of the destruction, with trees uprooted and houses flattened.

However, in humanitarian terms, a “major disaster was averted due to the elaborate preparedness measures taken by the government supported by civil society organizations,” according to the International Federation’s Emergency Plan of Action.

“Approximately 150,000 vulnerable people were evacuated to relief camps along the coastal areas and fishermen were not allowed to go fishing.”

On 10 November, nearly a week before Gaja came ashore, the first warning came from the India Meteorological Department that a depression over the south-east Bay of Bengal would soon develop into the “severe cyclonic storm” that became Gaja.

The government deployed army, navy and National Disaster Response Force personnel in both evacuation and search and rescue operations.

Full preparations for the arrival of Cyclone Gaja were underway from early last week. The IRCS, for example, Thursday quoted the Ramanathapuram District Collector (senior local official), Veera Raghava, Rao as saying that 70 state rescue personnel, 45 Red Cross volunteers and 60 other first-responders had been put on stand-by.

Red Cross volunteers and the National Society’s State Disaster Response Teams spent last weekend clearing away debris (photo) and providing first aid and relief supplies to some of the nearly 250,000 displaced people now staying in nearly 500 temporary shelters, according to the latest figures.

They were also supporting government-led search and rescue efforts, helping to clear roads and collecting donations from local people.

Nearly 60,000 homes have been completely destroyed, and many of the worst affected areas were inaccessible because of uprooted trees and other damage.

The IRCS is deploying surge teams from other states and Regional Disaster Response Team personnel from elsewhere in the IFRC Asia-Pacific region.

The IFRC says there were already concerns about outbreaks of dengue fever in Tamil Nadu before Gaja hit, and one priority now is to reduce the exposure of dispaced people to mosquito bites.

Beneficiary “selection criteria will focus mainly on the households who have lost their houses, livelihoods, women-headed households, disabled persons and those living in temporary shelters,” the IFRC says.