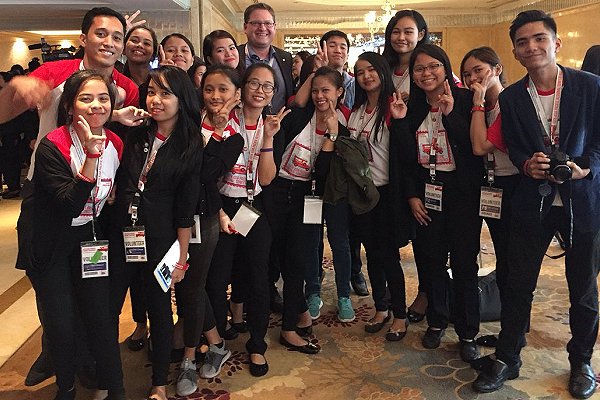 (The first part of this story, edited slightly here for length and time reference, appeared as an IFRC press release Wednesday.)

Red Cross and Red Crescent leaders from across Asia, the Pacific and the Middle East Wednesday committed to ensuring women make up at least 50 per cent of elected and appointed leadership positions within the next four years.

This landmark target is in the Manila Declaration, the outcome of the 10th Asia Pacific Red Cross and Red Crescent Regional Conference held from 11 to 14 November in the Philippines, co-hosted by the Philippine Red Cross, and which involved more than 300 humanitarian leaders from more than 60 countries.

Welcoming the decision, Lyndal Herbert, Deputy President of the Australian Red Cross, vice-chair of the conference and Asia Pacific focal point of the IFRC Glow Red women’s network, said: “This is an ambitious target and it demonstrates how serious the IFRC is to achieving gender parity at all levels of our organizations.

“This is about fairness, but above all it is about effectiveness. We know diversity of background, of experience and of views leads to better outcomes for the people we are serving.”

‘We are not powerless’

In addition to gender parity, the conference also set ambitious targets for increasing the number and diversity of volunteers, for improving and expanding support to vulnerable migrants and displaced people, and for the adoption of new and innovative approaches to disaster management, including forecast-based financing.

IFRC Secretary General Elhadj As Sy said: “What emerged from our discussions over the past three days was a common understanding of just how quickly our world is changing.

“We heard a lot from people responding to a range of crises who talked about how their work is becoming much more complex and much, much more demanding.

“As a result, there is a genuine appetite for new approaches that are more about prevention than response, that are more cost-effective and that, importantly, place more emphasis on the dignity and agency of vulnerable people.”

Another of the major themes to emerge was integrity. All National Red Cross and Red Crescent Societies present committed to putting in place or strengthening policies on the prevention of fraud and corruption and sexual abuse and exploitation.

Climate Centre Director Maarten van Aalst writes: The second of four important workshops in Manila addressed climate change, disaster and displacement – what our secretary general described as “the three existential challenges which are more acute in this region than in any other of the world.”

As he highlighted, Asia was the most disaster-prone region in the world last year, suffering 40 per cent of the nearly 400 cyclones, floods, bushfires and earthquakes worldwide.

It’s also home to the largest ocean nations on earth and, Mr Sy emphasized, “can lead our response to climate change, all the way from mitigation to adaptation and to resilience building.

“We are not powerless: shocks and hazards will always happen, but whether or not they become disasters will pretty much depend on our ability to prepare for them, to act early, to strengthen our capacity to withstand the shocks when they come…so that we don’t always find ourselves in the same situations of vulnerability.”

The IFRC’s secretary general, who sits on the new Global Commission for Climate Adaptation, called for work to be stepped up “along a continuum from early warning to resilience building”.

The former might be as simple as the bicycle relays of Bangladesh Red Crescent volunteers blowing horns to warn of cyclones, while early action can take a more sophisticated form, for instance, through the forecast-based financing that has helped ahead of floods in several countries or extreme cold in places like Mongolia.

As the IFRC’s specialist reference centre on climate, we’re confident these key messages that Mr Sy encapsulates well are falling on increasingly receptive ears, and will be reflected not just at COP 24 in Poland next month and next year’s UN Climate Summit, for example, but also in our own International Conference.

The UN summit will convene under the theme A Race We Can Win. A Race We Must Win; in reality that sums up not just a single conference but the entire climate issue facing humanity.

Philippine Red Cross volunteers helping to host the Asia-Pacific and Middle East Humanitarian Summit in Manila. The meeting pledged to ensure women make up at least half leadership positions within the next four years, while one of four main workshops focused on “existential challenges which are more acute in this region than in any other of the world”, including climate change. (Photo: PRC)