: do more to stop millions being left behind 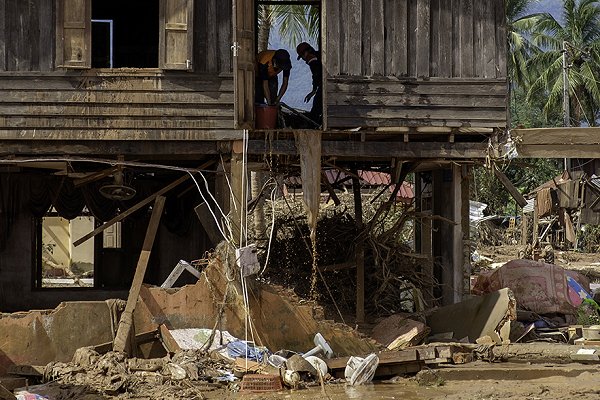 (A version of this story appeared first as a press release earlier today on the IFRC website.)

Millions of people living in crisis may not be receiving the humanitarian assistance they desperately need, the IFRC warns today. Its World Disasters Report 2018, just released, says this cannot simply be attributed to a lack of funding for humanitarian action.

“This report makes for sobering reading for everyone involved in humanitarian assistance. Even if all humanitarian appeals were fully funded, it is likely that many millions of people would still be left behind,” said IFRC Secretary General Elhadj As Sy.

“This report should shake the entire international humanitarian sector into actively seeking out those left desperate and hidden in the shadows.”

Poor information about who is most in need and limited understanding about how best to help them means that programmes are not always targeting the right people in the right way.

Inadequate access to those who need support and a lack of flexibility in expanding humanitarian assistance to people outside the traditional areas of conflict, disaster, displacement or disease often compound the problems.

The report provides a series of recommendations for donors, affected governments and aid groups on bridging these gaps in services, including the need for better data on those most in need of humanitarian assistance and, critically, it calls on them to prioritize and incentivize support for people hardest to reach.

It also makes a strong call for a major shift in how humanitarian resources are allocated, so that more money and more trust is put in the hands of local and national humanitarian organizations.

“If the vulnerable and under-supported groups discussed in the report are to be identified, reached, understood and supported, the international humanitarian sector must invest in local and national actors,” said Mr Sy.

“These groups, including National Red Cross and Red Crescent Societies, are uniquely well placed to help overcome the chronic issues outlined in our report. They are already present in crisis settings.

“They are our best hope for ensuring that those most in need of help are no longer left behind.”

“This past year or so has been hugely significant for the climate-related component of the IFRC’s mandate,” Climate Centre Director Maarten Van Aalst added today, “including most recently the historic science-humanitarian dialogue in Geneva and before that the expansion of DREF to include a window for forecast-based action, as well as growing attention to the climate-conflict nexus; the latest World Disasters Report reflects all this.

“It contains much useful detail about the humanitarian possibilities opened up by scientific progress in forecasting and, just as importantly, the growing willingness of donors to support forecast-based financing (FbF) and action.

“A more anticipatory approach will allow us to better target those in need and be more efficient with limited humanitarian resources.

“The report notes that nearly 20 National Societies worldwide are now implementing FbF pilot projects, while partners such as the World Food Programme, the UN Food and Agriculture Organization, and the Start network have also been using approaches based on similar prin­ciples.”

Ban Man village in south-east Laos was one of at least 13 devastated by flash floods this year, and people returning to their homes faced a daunting clean-up task. The picture is among those illustrating World Disasters Report 2018, which notes that “[c]onsistent with their huge impact globally, floods were by far the larg­est single trigger of IFRC response…32.6 per cent of [the total] since 2008,” and also that much IFRC work on risk reduction now centres on hydro-mete­orological disasters, mainly floods and storms. (Photo: Bart Verweij/IFRC)