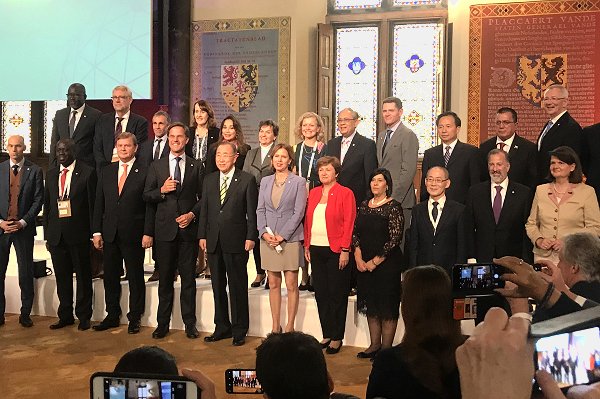 A new Global Commission on Adaptation has been formally launched at an event in The Hague by world leaders gathered at the invitation of the Netherlands to catalyse an international movement “to bring scale and speed to climate adaptation solutions,” the Global Center on Adaptation (GCA) said in a press release.

“Succeed we must, because adaptation isn’t a choice, it’s a necessity,” said Dutch Prime Minister Mark Rutte, concluding his introduction to the two-day event in The Hague, which ended today.

The Commission will “elevate the visibility and political importance of climate adaptation and encourage bold solutions like smarter investments, new technologies and better planning to become more resilient to climate-related threats,” the GCA release added.

The major international move on adaptation, it said, followed “one of the deadliest summers of climate-related weather disasters affecting countries all over the world”.

Mr Ban told the gathering of world leaders that the “costs of adapting are less than the cost of doing business as usual, and the benefits many times larger”.

For Ms Georgieva: “We face a choice: business as usual and hope for the best, or we act now and build for a resilient future.”

Mr Sy said in an IFRC press release yesterday: “Shocks and hazards don’t have to become natural disasters if we give early warning and take early action: saving lives, preserving livelihoods, promoting ways of life that adapt to changing circumstances. We in the IFRC commit to helping the world accelerate adaptation.”

The GCA has identified what it says are four “major roadblocks” slowing adaptation that it will try to address: lack of awareness of the opportunities from becoming more resilient, climate risks missing from social and economic development planning, insufficient focus on the vulnerable, and – to date at least – a lack of global leadership.

The commission, which will prepare a flagship report for the 2019 UN Climate Summit, will work in the areas of food security, rural livelihoods, global supply-chains, cities, infrastructure, finance, social protection and natural solutions.

‘Succeed we must, because adaptation
isn’t a choice, it’s a necessity’

It hopes to “demonstrate that adapting to climate change is not only essential but also an opportunity to change the way our societies plan and invest,” said the GCA’s chief executive, Patrick Verkooijen.

“It will provide the road map for what new actions are needed and what must be done differently to secure more sustainable economic development and security for all.”

The argument of one new commissioner was seen as chiming with key messages from the Red Cross Red Crescent and Partners for Resilience (PfR) in particular: Philippine Senator Loren Legarda – who chairs senate finance, foreign relations and climate committees – said she and her colleagues try to make sure reducing risk is mainstreamed into the national budget.

She believed “the commission must guide nations into believing that it makes good socio-economic sense to mainstream adaptation and resilience into national budget processes.”

Advocacy should also translate into “into urgent, local climate action” and, thirdly, “we must make sure that there is a convergence of governments’ best practices, public-private sector partnerships, academia and science to work for the most vulnerable and the poorest populations in the world”.

Supporting Elhadj As Sy’s call for more attention to humanitarian issues and especially the rising risk of extreme-weather events, which now account for more than half the IFRC’s emergency operations, Climate Centre Director Maarten van Aalst offered the Climate Centre’s help to the commission as a research partner on the new report.

With the benefit of its experience in working to build the resilience of vulnerable communities through programmes like PfR, forecast-based financing and BRACED, the Climate Centre would “assist with high-quality analysis to help shape implementation and action”, he said at a formal stakeholder dialogue today.

In partnership with the International Institute for Environment and Development, for example, it would also invite the commission to well-established platforms such as Development and Climate Days alongside the annual COP meetings to “consult widely and hear voices of the people and countries most affected by the rising risks”.

The launch event took place in The Hague’s historic Ridderzaal, the Hall of Knights, which hosts the state opening of the Dutch parliament.

Group photo on Tuesday, the first day of the launch event for new Global Commission on Adaptation at the Ridderzaal. Dutch Prime Minister Mark Rutte stands next to former UN Secretary-General Ban Ki-moon in the front row. The IFRC’s Elhadj As Sy is at top left. (Photo: GCA)