The young asked to take the lead on climate 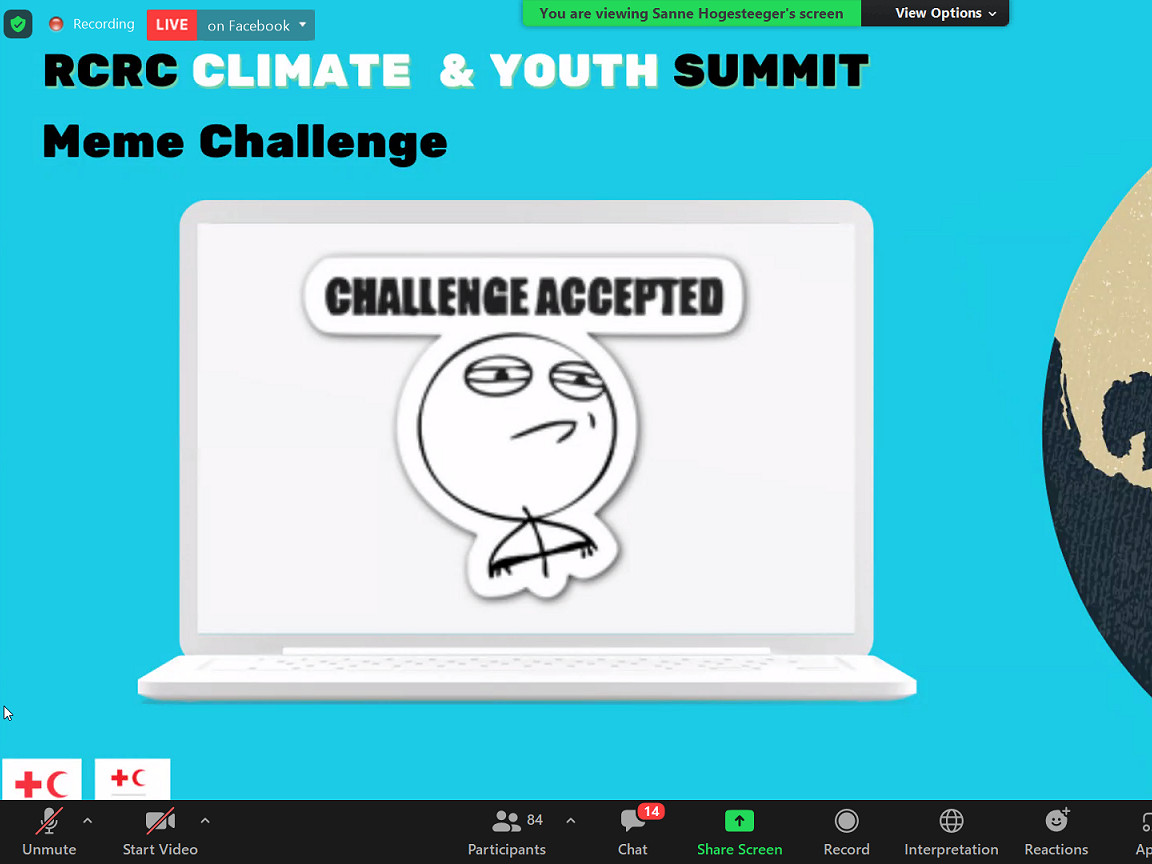 More than 700 young people all over the world registered for the Red Cross Red Crescent Movement’s first-ever youth-led climate summit, organized by the IFRC Youth Commission and the Climate Centre today.

Introducing the event, Michelle Chew – the commission’s Asia Pacific representative – said it was not always easy for the young to get a seat at the top table on climate, “but what matters is not whether the table is big or small – if you can start influencing your own local communities, your university, your town, to take up action on climate…we’ll all end up in a better position.”

The summit’s main sessions covered the Red Cross Red Crescent strategy for action by youth on climate, launched in April, and the Movement’s expected role at the pivotal COP 26 meeting to be held in Glasgow later this year.

“Youth volunteers are essential for local activities; they also demonstrate and teach humanitarian values which contribute to a culture of non-violence and peace, and building resilient communities.”

He added in a videotaped message: “We need to keep working with our communities in order to raise awareness of climate-related risk and to help build resilience.

“Youth is not only the future; young people are here now…I am proud of each and every one of you.”

At a breakout on “creating impact at COP”, the Climate Centre’s Shaban Mawanda outlined agreed policy asks for the Movement at the UN climate talks – including the young based in National Societies: a focus on the most vulnerable, climate finance, policy coherence, anticipatory action, sustainability, nature-based solutions, and health.

“National Societies are uniquely well-positioned in their auxiliary role to engage and influence governments to call for greater climate action and a balance between adaptation and mitigation,” he said.

‘Youth is not only the future;
young people are here now…
I am proud of every one of you’

Another breakout facilitated by the Climate Centre focused on two things that have emerged as crucial for society in the aftermath of Covid: health and social protection.

“Affordable health infrastructure and safety nets are needed to ensure that everyone has a life with dignity. And the role of youth is all the more important in driving this message home,” organizers said.

Also arguing that climate change was above all an issue for the young, Climate Centre Director Maarten van Aalst said climate science was now barely even necessary to “tell us what is needed and how urgent it is.

“It is clear that climate change is hitting everywhere and the most vulnerable are getting hit hardest.

“Politicians will need the science base and the documentation to be spurred into action with formal knowledge,” he said in his own message to the summit. “But much more important are the conversations in the streets everywhere, and we need your voices and your actions on the ground in all of your local communities.”

Second prize, for an education and social media programme, went to Antonio and Emilia Oliveira from Portugal, and third prize, for education and work on water-saving tippy taps, to Radimilahy Tsioriniaina Ernest from Madagascar.

The day also included the Climate Centre game Decisions for Seasons and the IFRC’s first use of Gather Town– “a virtual world where practically anything is possible” – increasingly used by businesses, schools, universities and social groups to interact online through digitally created avatars.