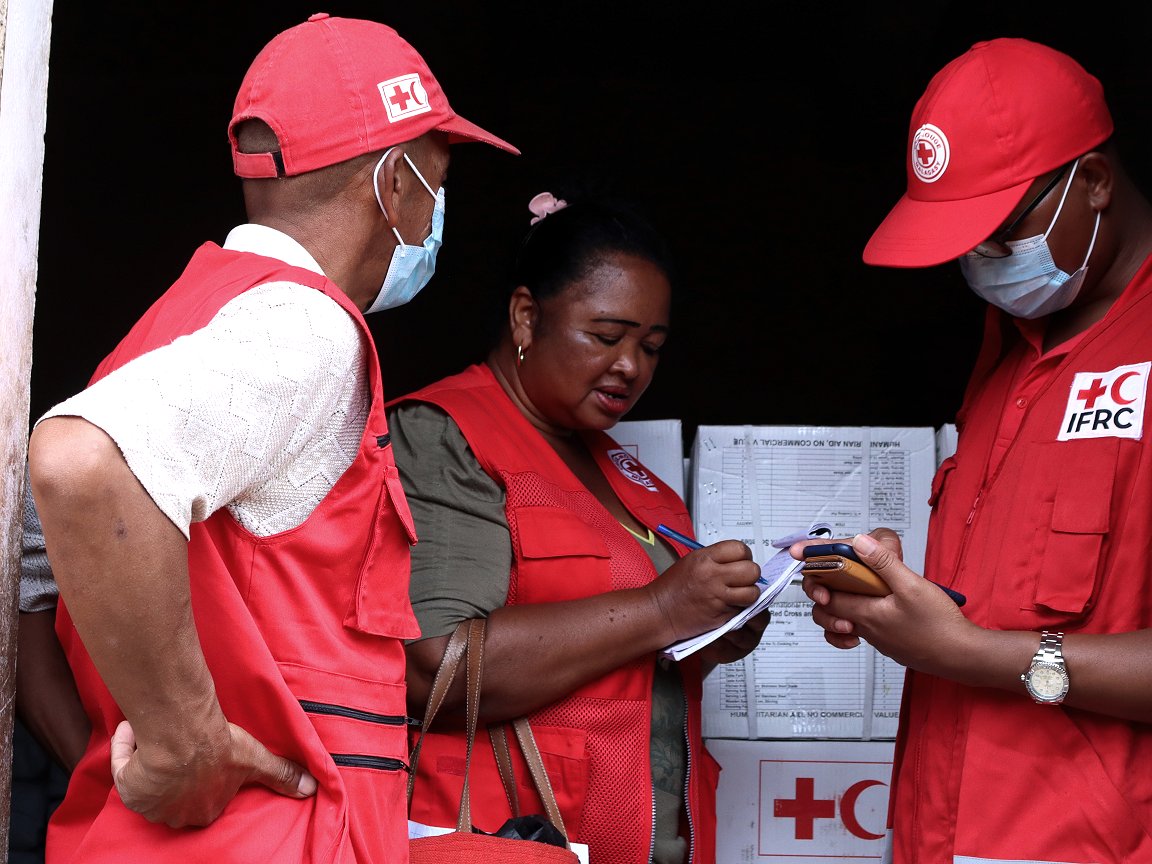 It came the day before Cyclone Batsirai was due to make landfall on Madagascar’s coastal Atsinanana region, exactly two weeks after Cyclone Ana wreaked havoc in the country before tracking across Southern Africa.

The DREF has already sent more than 400,000 Swiss francs to provide water, sanitation, and hygiene services, healthcare, and psychosocial support, as well as cash for shelter, livelihoods and basic needs; it says more financial resources are needed and is now revising its emergency appeal.

Ahead of landfall, Malagasy Red Cross teams in the region were preparing emergency relief items and helping communities in the path of the cyclone to move to safe areas, an IFRC press release said today.

More than 4 million people are estimated to be at risk in 14 districts, with nearly 600,000 directly affected and 150,000 likely to be displaced.

‘We are are deployed in communities,
warning them of the approaching storm’

Andoniaina Ratsimamanga, the Malagasy Red Cross Secretary General, said: “Communities across the Atsinanana region are worried about the potential widespread damage the cyclone could cause.

“Many families urgently need temporary shelters, especially those whose homes are located in the areas that are likely to be impacted by the cyclone.

“Madagascar Red Cross Society’s teams and partners are on high alert and are deployed in communities, warning them of the approaching storm.

“Red Cross teams are moving prepositioned emergency stocks…for ease of access. We are concerned by the size and projected impact of this intense cyclone.

Red Cross teams were also working with the government to set up safe buildings as emergency accommodation centres, as they did before Cyclone Ana struck last month, and on search and rescue.

With emergency response efforts still ongoing after Ana, the impact of Batsirai could worsen the overall humanitarian situation in Madagascar, the IFRC says.

The country’s emergency response efforts are overstretched, and the situation remains critical due to recent widespread flooding, water stagnation and landslides caused by Ana.

At least 55 deaths have been recorded and more than 130,000 people have been forced to flee their homes in the last few weeks.

“With the landfall of Batsirai, many more families in the country will require emergency relief items, including blankets, sleeping mats, kitchen sets, water, sanitation and hygiene, among others.”

Batsirai (which means help in the Shona language) has already affected the islands of Mauritius and Reunion, killing at least person in Mauritius and causing widespread power cuts, media reports said Friday.

Malagasy Red Cross volunteers were engaged in a maximum effort this weekend to reduce the impacts of the second cyclone to hit the island in as many weeks. (Photo: Caren Ramanantoanina/IFRC)