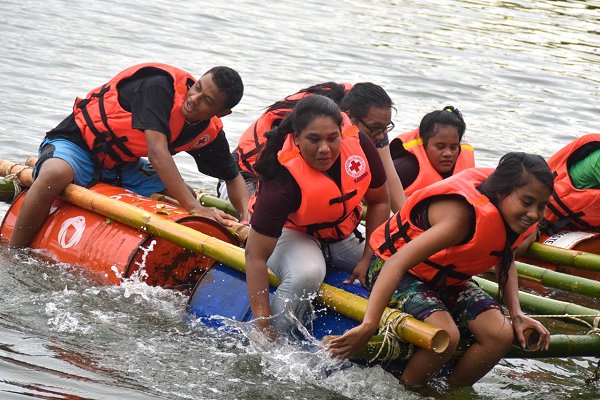 The first ever North Pacific youth leadership ‘supercamp’ that ended in Pohnpei, Micronesia earlier this month also saw the culmination of a short programme to train 14 new facilitators for Y-Adapt, who now plan to introduce the methodology to their National Societies.

For a week the camp buzzed with the laughter and singing of 50 young volunteers from the Micronesia region, challenging themselves with leadership, teamwork and Y-Adapt exercises.

The supercamp, hosted by the Micronesia Red Cross Society, is seen as the opening of a new chapter in the story of youth engagement on climate in the Pacific.

The new facilitators returned home to their families and friends with a complete Y-Adapt toolbox, ready to take action on climate adaptation and engage people in their communities.

Seventeen-year-old Emma Annabelle Filelmar Mathau, from the Micronesian island of Yap, is one of newly trained Y-Adapt facilitators to emerge from the summer camp and a special Y-Adapt training session, supported by the New Zealand Red Cross with funding from the New Zealand Ministry of Foreign Affairs and Trade, that immediately preceded it.

“I just started as a Red Cross volunteer a few weeks before coming here, and now I will never stop,” she says.

“Fighting climate change in our communities and the cause of the Red Cross is too important not to be a part of.”

Alex Torres, Head of the IFRC’s North Pacific Sub-Office, based in Palau, Micronesia, said: “The intention is to develop the skills of emerging youth leaders while expanding access to training opportunities in the North Pacific.

“To me, this successful supercamp is also a great example of the potential of practical collaboration between National Societies in mounting a complex back-to-back event, with support from volunteer facilitators from Zimbabwe, the IFRC Sub-Office and the IFRC Asia Pacific office.”

The small-island nations of the Pacific are among the most vulnerable in the world to increasing climate risks and young people in the region have been increasingly expressing their concern about climate change, making clear their strong desire to take actions to reduce its impacts.

Since the regional Pacific Youth Climate Change Forum in Kiribati 2017 and the Pacific Resilience Meeting in Fiji in May, young people are demanding action and not just talk.

The training and the later practice sessions at the supercamp constitute Y-Adapt’s debut in the Pacific region; it has already been piloted and/or fully rolled out by National Societies in (alphabetically) Guatemala, Haiti, Iran, the Philippines and Uganda, as well as in a recent Mediterranean Climate Week attended by people from six National Societies.

“The North Pacific training was an exciting next step in the agenda for the rolling out of Y-Adapt worldwide, and the joint facilitation in Pohnpei by the Philippines Red Cross also marked the initial exploration of the ‘National Society to National Society’ training model,” said Brigitte Rudram, Climate Centre Technical Adviser, who was also in Micronesia for the sessions.

“I am not nervous because I have received good training and will continue to receive support from my facilitation partners and the Red Cross.”

In addition to Y-Adapt, other important tracks at the week-long supercamp were an introduction to low-cost, low-tech community engagement, and ways young people can use social media to get across their messages on climate.

Plans for the Y-Adapt action phase in the volunteers’ home islands include drought awareness, preparedness for extreme rainfall, storms and floods, and reforestation.

One of the more challenging exercises at the North Pacific supercamp was for teams of eight to build a raft using ropes, oil drums and bamboo, then sail it on a short voyage. (Photo: Carl Gustav Lorentzen/IFRC)