‘A place that used to be alive’: the reality of climate impacts on the world’s coastlines 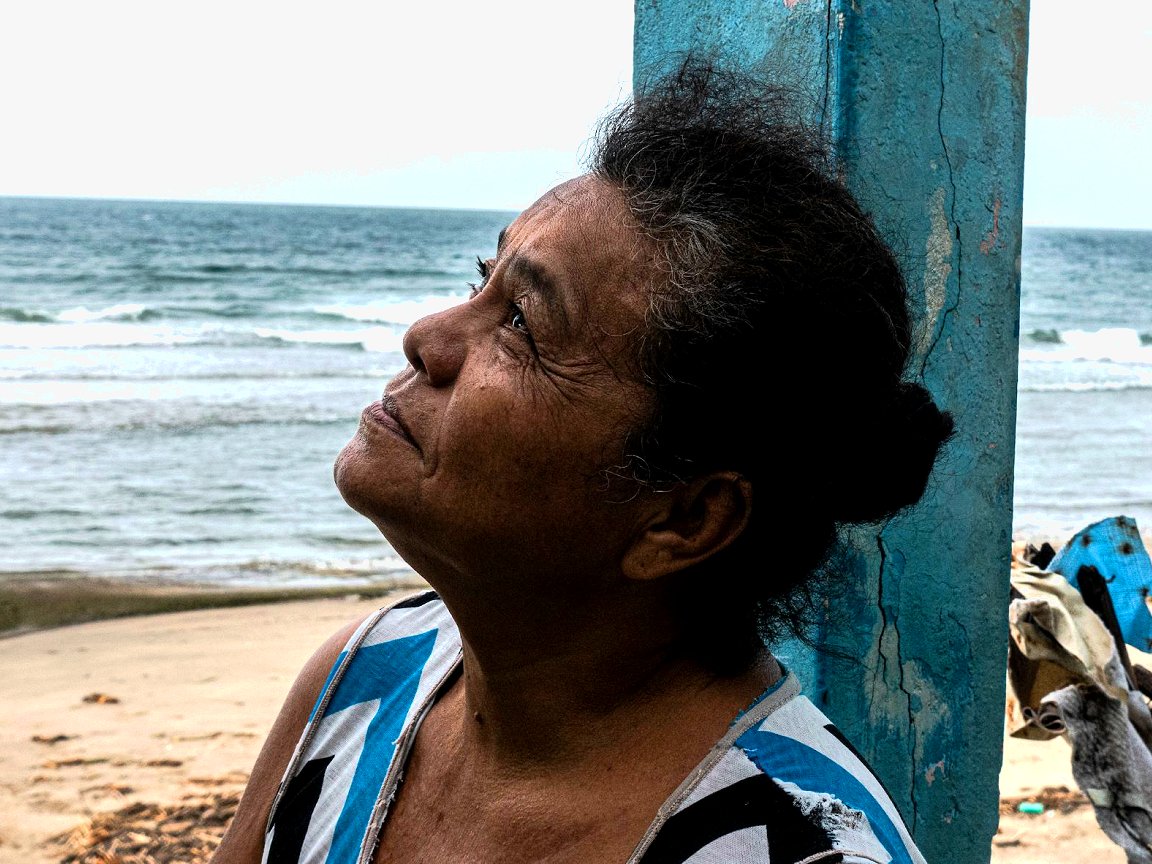 Every night the waves eat away at the sand under the foundation of his house in the small Mexican coastal town of Sánchez Magallanes; every morning Juan Izquierdo shovels it back.

He and his wife Alicia (photo) used to enjoy their beautiful ocean view. Now the sea “presents a constant threat to their lives and safety”.

Sánchez Magallanes lies between the ocean and lagoons in Tabasco state, “a place that used to be alive”, in the words of the Secretary General of the Norwegian Red Cross, Bernt Apeland – with others at the Norwegian UN mission in New York yesterday formally launching Turning the Tide: Adapting to climate change in coastal communities, a report published late last year, and a photo exhibition.

“We can talk about adaptation,” he said, “but what happens when the limits to adaptation are breached? Alicia and Juan still live in their house on the beach, but they are gradually losing walls and entire rooms to the ocean.”

The launch event also included Rabab Fatima, the Permanent Representative of Bangladesh to the UN, and Osama Mahmoud Abdelkhalek Mahmoud, Egypt’s Permanent Representative, who quoted the UN as saying that “a [one] metre rise in the sea level will displace approximately 6 million Egyptians and destroy 4,500 square kilometres of crop land in the north of the Nile Delta.

Ambassador Mahmoud told the seminar that as incoming president of COP27, Egypt would put forward substantive initiatives “aimed at achieving a balance in financing between mitigation and adaptation”.

Turning the Tide is a joint effort by the IFRC, the Bangladesh and Somali Red Crescent, the Mexican and Norwegian Red Cross, and the Climate Centre; it includes compelling first-hand accounts of “remarkable and resilient” people living in coastal areas in Mexico, Somalia, and Bangladesh.

Norway’s Deputy Permanent Representative Odd-Inge Kvalheim told yesterday’s event that “the priority area for us is to support reliable weather-data for climate services and early-warning systems.

“This includes adequately transforming observations and data into readable, understandable numbers for the end-user…farmers and fisherfolks as well as policy- makers.

“We also need to strengthen the gender perspective to make sure our efforts in building resilience are effective. We must use women’s experience and knowledge related to vulnerability and resilience.

Thanking the governments and National Societies involved, IFRC Secretary General Jagan Chapagain said: “Solidarity and partnership is so important if we want to make a difference to this massive, massive crisis.

“We need this combination of global policy and local action and they have to go hand in hand…it’s not ‘either or’. The focus of both must be people and communities at the centre.”

A panel discussion at the seminar was moderated by the Climate Centre’s Climate Risk Adviser, Roop Singh, and included Brenda Avila Flores of the Community Preparedness and Resilience Program for Disaster Risk Reduction at the Mexican Red Cross, and speakers from the Alliance of Small Island States, OCHA, IOM and the World Bank.

Key recommendations in Turning the Tide (also available in Spanish) include early warning systems such as the Cyclone Preparedness Programme in Bangladesh, better connectivity and infrastructure to facilitate communication and evacuation before storms, protection for domestic assets and livelihoods like fishing, and nature-based solutions generally.

Sánchez Magallanes used to be a lively town between the ocean and lagoons in the Mexican state of Tabasco, but storms and erosion have driven many residents away. Alicia Garcia (photo) and her husband Juan Izquierdo are among 7,000 who have decided to stay for the time being, but every night the sea eats away at the foundations of their house. (Photo: César Rodriguez/Mexican Red Cross via IFRC).