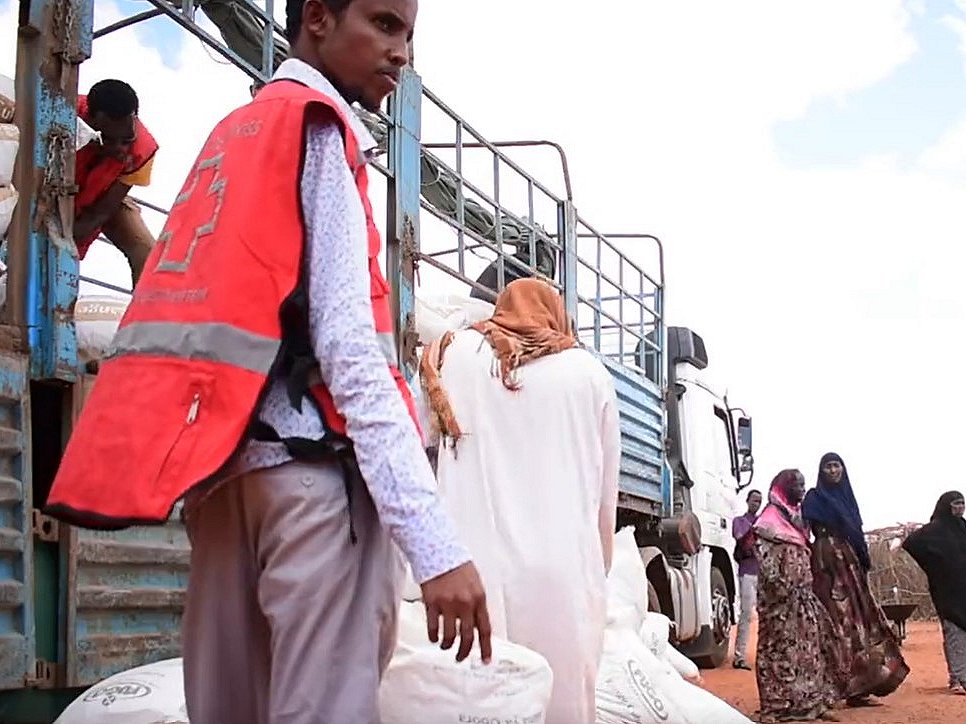 (This story and accompanying video shot last month in Garissa county were released by the ICRC earlier today. It has been slightly adapted here. In 2017, World Weather Attribution scientists, in a detailed study, found a “detectable climate signal” in atmospheric temperatures behind the drought that year and before.)

Millions of Kenyans do not have enough to eat amid the worsening drought, and a growing number of people have been losing their livelihoods to extreme weather, the ICRC said today.

“We don’t have markets where we can buy food and we don’t have farms. The only income we have is our livestock and we have lost that,” says Mohammed Noor Afey, a community leader in Garissa, Kenya.

In recent years, rain-fed agriculture in the Horn of Africa has been crippled by the lack of rains.

Now, livestock, one of the key livelihood sectors, has also been severely affected by climate shocks, which have become more frequent and severe.

‘For the last three years, there has not been a single drop of rain. All these houses have been abandoned. Few of us have remained here’

“Rainfall patterns are highly decreasing and the temperatures increasing. This means that even the water pans we have will not harvest enough water,” says Samuel Odhiambo, Garissa County Director of Kenya Meteorological Department.

A shortage of water and food for livestock has pushed many people to leave their homes.

“For the last three years, there has not been a single drop of rain. All these houses have been abandoned by their people. Few of us have remained here,” says Dubey Ibrahim Werar, a resident in Garissa.

Deteriorating purchasing power led to rising rates of malnutrition among the most vulnerable communities, who have limited access to a healthy diet and health care.

Droughts are slow-onset emergencies, and meteorological forecasts for the Horn of Africa remain pessimistic.

“The meteorology department are saying we are expecting below average rainfall in the coming season, so that means we are going to have a lot of issues in terms of animal body condition deteriorating,” says Mohammed Dubow Aden, Garissa County Coordinator, Kenya Red Cross.

The ICRC is working together with Kenyan Red Cross Society to help communities build resilience in the face of the erratic weather patterns.

The two organization have been distributing relief food and animal feed in four drought-affected counties: 12,000 people received food and over 30,000 received livestock feed.

At the same time 2,000 households will receive cash support for three months.