Y-Adapt in Guatemala: ‘dynamic, cool and perfect for young people’ 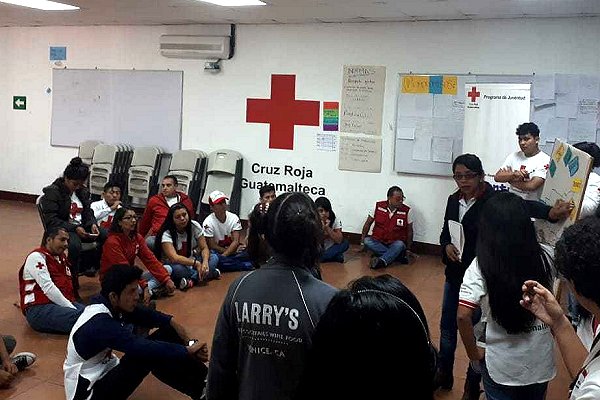 Nearly 40 young volunteers from 15 branches of the Guatemala Red Cross (GRC) last week took part in a Y-Adapt (Yo me adapto) workshop that also included a strong message on rolling back plastics pollution.

“We need to get across that plastics in our community do a lot of damage and we have to reduce thr use,” said Elder Valenzuela, a volunteer from the GRC Puerto Barrios branch on the Caribbean coast.

The climate and environmental issues are key themes in GRC youth work.

Angela Zacarias, a volunteer from the south-western department of San Marcos, said Yo me adapto was “a refreshing change from traditional workshop methodology.

“It’s also adaptable for the context – as useful on the Pacific and Caribbean coasts as for me inland in the west.”

The Red Cross volunteers who took part in the workshop described Yo me adapto as “dynamic, cool, and perfect for young people”, helping them provide insights on their own experience of how climate change affects them.

The three-day event in Guatemala City was facilitated by graduates of the May training of trainers session for Yo me adapto, funded by the National Society itself, that also included Scouts and some city officials from the capital.

It was a joint initiative of the GRC Director of Volunteers, Felix Castañeda Escobedo, who also took part in the May training, and it’s hoped a further Yo me adapto workshop will be held early in the New Year.