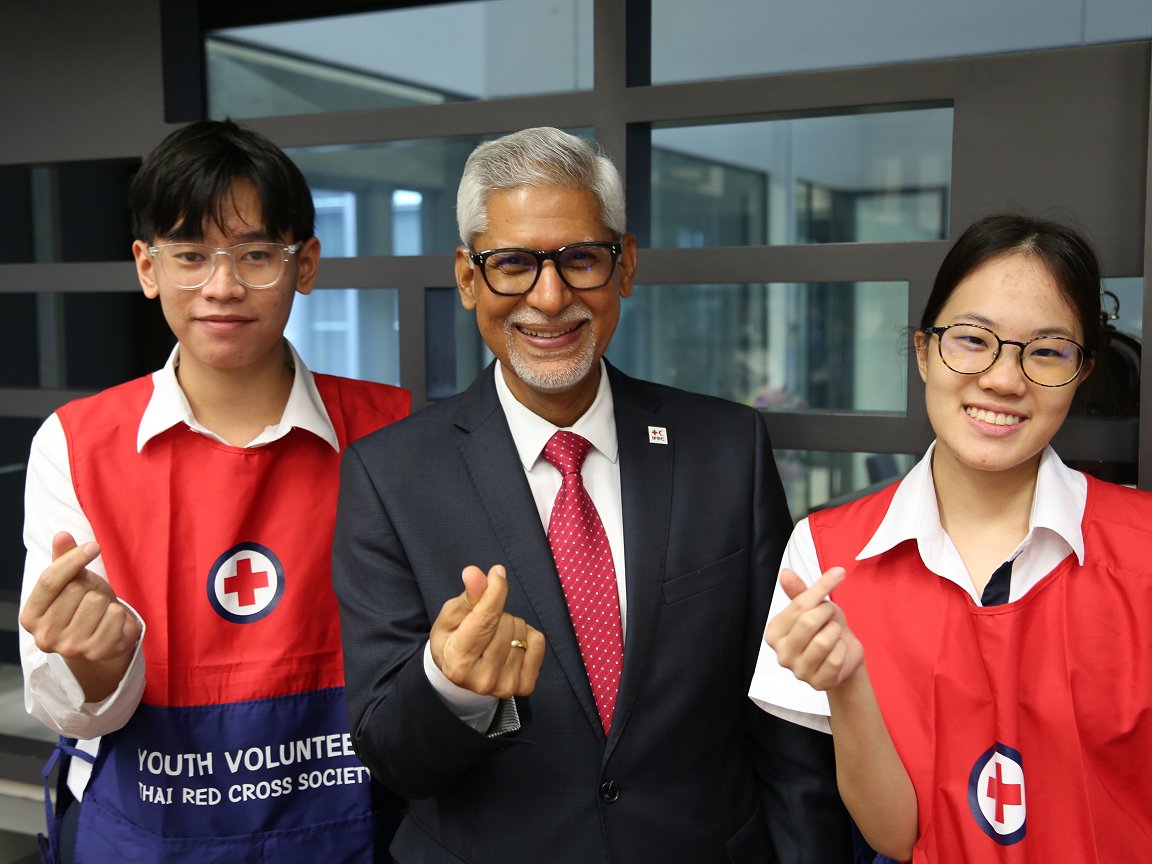 Participants were welcomed by Michelle Chew, the commission’s Asia Pacific representative, who said: “What really strikes me is how the Red Cross Red Crescent has started acknowledging that young people are indeed the leaders driving climate action.

“So let’s celebrate the amazing work that youth climate champions across the world have done to raise climate awareness, take action, and be effective climate advocates, in the full knowledge that there’s still much more to be done in this space.”

IFRC Secretary General Jagan Chapagain told young people who logged on from all over the world he was “very proud that the young have secured official recognition as stakeholders in designing and implementing climate policies and action.

“This is real and long overdue progress,” he added in a specially recorded video message. “Protecting people from the impacts of the climate crisis and strengthening communities to become more resilient is our top organizational priority, and young people are at the centre of our actions.”

There were countless examples of young people supporting their National Society, inspiring change and creatively building resilience in their communities, he continued.

“We want to do more to consolidate and catalyse your energy and your actions. Our new [advisory group] is a key platform for young climate champions to voice their ideas, concerns and work in climate action.”

The IFRC’s youth-led strategy on climate action was a “key framework” encompassing the focus areas of awareness, advocacy and action, he added; the Solferino Academy’s Limitless Initiative, which supports collaborative problem-solving would soon be updated to a Limitless 2.0 focused on climate action.

The IFRC strategy, launched last year, recognizes the key role youth play in ensuring that future generations do not suffer the consequences of a worsening climate.

‘If you were in my shoes, what would your Number 1 priority be?’

The summit then moved to a light-hearted Q&A exchange between outgoing Climate Centre Maarten van Aalst and Doris Mwikali, from the youth advisory group, who is Africa’s representative to the SDG4 youth committee focusing on creation of climate-smart education.

“If you were in my shoes as director of the Climate Centre – and who knows, there might be vacancy soon – what would be the Number 1 priority that you would advise for someone in that role to take forward? he asked.”

“I think you’re already doing it,” Doris replied. “I think what needs to be done is scaling it.

“I mean we already formed the youth advisory group, which is a great step in involving young people meaningfully in terms of policies … and ensuring this is not just within the Climate Centre but also translates in terms of advice and best practices within National Societies.

“So if I was in your shoes and I get that job next week, I think what I’ll be doing is just scaling what is already being done by the Climate Centre in terms of putting in more money, putting in more time, to ensure that it’s just not the six members of the advisory group advising the centre.”

Breakout sessions during the day included, among others, organizing volunteers, by the Spanish Red Cross, who also joined forces with the Centre for the Cooperation in the Mediterranean for a session on helping branches become climate compliant.

The Climate Centre teamed up with the Environmental Peacebuilding Association to present a breakout connecting climate and youth-led work in the area.

In the second half of the summit, the Climate Centre’s Senior Technical Adviser for Health and Climate, Tilly Alcayna, used photos and graphics to illustrate how the aerial arts and acrobatics being demonstrated this week at UR2022 in Brazil can help understand risk in the humanitarian world.

She identified five useful risk-related factors that were mirrored by the circus arts: viewing risk from a variety of perspectives, balance amid instability, support structures, prediction and anticipation, and safety.

A plenary session on COP engagement reviewed how young people experienced the latest round of UN climate talks and how to get ready for COP28.

Margot Curl, the Climate Centre’s Manager for Innovative Engagement and Youth, summing up, said: “All in all, this was a great step for Red Cross and Red Crescent youth to connect and be inspired.

“As Doris aptly remarked, this is a great start and we are looking forward to much more, seeing young people connect around the world and make their mark to take relevant climate action.“

IFRC Secretary General Jagan Chapagain with young Red Cross volunteers on a visit to Bangkok in September this year. He told the second annual Red Cross Red Crescent Movement youth climate summit he was “very proud that the young have secured official recognition as stakeholders in designing and implementing climate policies and action.” (Photo: IFRC)